While it may be somewhat controversial, the old concept of having restrooms built in commercial facilities only for males and only for females is not necessarily disappearing, but shall we say, alternatives are popping up. We are finding this happening in all kinds of locations including schools, office buildings, and most especially in a variety of retail sectors. One variation is called “gender neutral” restrooms. A gender-neutral restroom is usually a locking, single-stall restroom. It can be used by anyone: male, female, “otherwise,” or child.

However, a restroom alternative that is raising a few eyebrows, even in the most sophisticated of settings, is the unisex restroom. Whereas a gender-neutral restroom is essentially a private restroom, a unisex restroom, also known as an “all sex” restroom, is for males, females, the “otherwise,” as well as children, typically when accompanied by an adult.

Unisex restrooms are being met with mixed reactions, even though it is expected the number of unisex restrooms to be installed in commercial facilities in this country will increase significantly in years to come. More about that later. But for now, according to law Professor John Banzhaf with George Washington University, unisex restrooms, “go too far too fast. Some women might be upset using the facilities in the presence of men… there is also the fear factor (for women) over the threat of physical harm when men are in such close proximity.”

While there may be apprehension and a “fear factor” to contend with at the moment, among the reasons we can expect more unisex restrooms in the future are the following:

Construction cost savings – Very simply it costs less to build one large restroom for all sexes than it does to build two separate restrooms, one for males and one for females.

Plumbing cost savings – In most unisex restrooms, urinals are not installed, only toilets and sinks. This helps reduce fixture costs, plumbing costs, along with plumbing maintenance and repair.

Faster lines – Studies indicate that overall, restroom wait time for women drops by 63 percent when unisex restrooms are installed; for each urinal removed or not installed in a unisex restroom, as many as two toilets can be installed.*

Fewer cleaning and maintenance needs – Compared to a single sex restroom, cleaning just one large restroom instead of two smaller restrooms is a time savings… or is it?

Cleaning Needs of Unisex Restrooms
While it would seem that cleaning just one large restroom would be faster than cleaning two smaller ones, that has not necessarily proven to be the case. This is because, among other reasons, having one larger restroom means it is likely busier.

Further, it will have more toilets in place of urinals, and because women often use the restroom for breast feeding, many private stalls will have their own sink. Each of these factors will slow the cleaning process and all this means that while “on paper” it may look like it would be faster, in reality the cleaning of unisex restrooms will invariably require more cleaning time, not less. 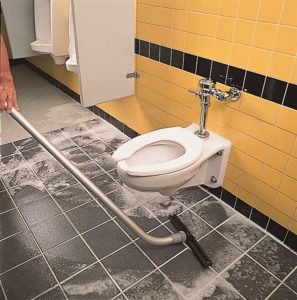 Another option, which will certainly speed the cleaning process, is to clean unisex restrooms using a spray-and-vac cleaning system, commonly known as a no-touch cleaning system. Many of the steps mentioned earlier such as the manual cleaning of fixtures and counters can be eliminated, saving time. This has been verified by the ISSA Cleaning Times, which reports spray-and-vac cleaning is about two-thirds faster than traditional restroom cleaning methods.**

These systems have also proven more effective at removing germs and bacteria from fixtures and surfaces. In some cases, this was possible even without the use of cleaning solutions or disinfectants.

Finally, because more people will be using the unisex restroom, the use of an ATP (adenosine triphosphate) monitoring system on a regular basis is recommended. While ATP monitoring does not detect germs and bacteria, a high reading can indicate the presence of potentially harmful contaminants on a surface. Testing should include all high touch areas and results should be saved so that any negative trends can be noted and dealt with quickly.

Robert Kravitz is a frequent writer for the professional cleaning industry.

*A few years back in China, a campaign called “Occupy Men’s Toilets” flared up, sometimes spontaneously. Women took over men’s restrooms in large public facilities such as train and bus stations. This happened when the line for the men’s restrooms was short or non-existent while in the same station, at the same time, women would sometimes wait fifteen minutes to use a restroom. So, as the name implies, they simply took over the nearest men’s restroom.