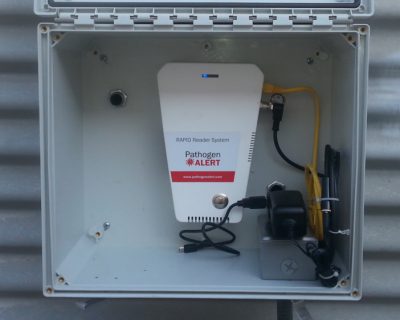 To safeguard the health of building occupants, nearby personnel and even individuals innocently passing nearby, HVAC professionals that install chiller systems with cooling towers are seeking solutions that reduce the chance of spreading the potentially deadly Legionella bacteria that causes Legionnaire’s disease.

Fortunately, new continuous monitoring devices are now on the market that can detect airborne Legionella and provide automatic notification within a matter of hours. This not only eliminates waiting days for outside lab results, but also enables a proactive response that dramatically reduces the risk of a devastating outbreak or costly litigation.

Legionnaire’s Disease in HVAC Systems
Legionnaire’s disease is a severe, even fatal, form of pneumonia caused by the bacteria. According to the Centers for Disease Control and Prevention (CDC), 6,000 annual cases of Legionnaires disease were reported in the United States, with one out of 10 dying.

Although Legionella is found naturally in bodies of water and in the majority of building water systems, the highest risk is when the bacteria becomes airborne in mist, spray or droplets that can be breathed into the lungs.

This is where cooling towers play a critical role. In HVAC, cooling towers are often used in conjunction with chillers for large building cooling systems. A recent CDC study involving 196 cooling towers nationwide found that 84 percent contained Legionella DNA in the water.

The problem is that cooling towers by their very nature use evaporative methods to rapidly cool the water in the system. This can cause “drift” – a fine mist – that can travel long distances based on wind speed, building height, and cooling tower location.

For buildings where cooling towers are installed on roofs in nearby vicinity of fresh air intake systems – as is often the case – this could expose the building’s occupants to the bacteria. It can also pose a risk to nearby building personnel conducting maintenance.

When drift is considerable, it can affect individuals in nearby buildings, parking lots and even on the street as well. Reports show that airborne Legionella can travel as far as one mile in some instances.

Such was the case in recent national news that Disneyland had to shut down two cooling towers, located over 100 feet from areas accessible to guests that were ultimately found to have Legionella. According to the L.A. Times, in the Legionnaire’s disease outbreak, 11 of 15 people infected had visited the park, and four had not – including two that died.

These, and other incidents, are serving as a wakeup call for HVAC industry professionals that utilize cooling towers with chillers.

This stands in stark contrast to the days or even weeks shipping samples to off-site labs before receiving results.

Current testing methods typically involve infrequent (i.e. monthly or quarterly) tests using settle plates that contain culture media exposed to the air that are then incubated or impactors that must be sent to a third party lab for analysis. For these types of tests, it can be three days before the results are available.

Tests are also often performed on the water itself, which can demonstrate the presence of Legionella but not determine if there is any airborne risk. 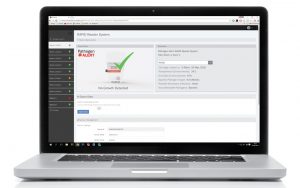 Instead, continuous monitoring devices such as PathogenAlert’s RAPID (Rapid Airborne Pathogen Identification and Detection) Reader System can detect and confirm the presence of airborne Legionella within hours of sampling.

The small wireless device mounts anywhere and operates by automatically sampling the air in cooling towers, chillers, ducts, or other high risk areas every five minutes (or any other time frame specified) on a 24/7 basis. Air is drawn in and flows across the cartridge, allowing any Legionella microbes to settle on a nutrient rich site where it then begins to grow.

To detect pathogen growth, the device uses optical measurement and laser technology, along with electronic digital signal processing. Inhibitors are utilized to eliminate false readings. Detection software also monitors for erratic behavior that can be caused by non-pathogenic particles, such as dust, and compensates appropriately.

The RAPID Reader can be mounted just about anywhere, including on cooling towers, inside building ductwork or anywhere in occupied areas. Up to 25 sensors can be connected to a single base station with each sensor covering roughly 2,500 square feet.

The cloud-based platform allows continuous, remote online monitoring of individual or multiple locations from a laptop “dashboard” that consolidates key data for review. Alarms and notifications can be sent to any mobile device.

Early Detection = Early Remediation
One of the primary goals of early detection is to allow existing and effective remediation techniques known to destroy Legionella bacteria to be implemented as early in the process as possible.

Although it is a standalone product, the RAPID Reader System can be bundled with Germicidal UV light systems that destroy Legionella in seconds, for example.

Germicidal UV light in a specific wavelength deactivates the DNA of bacteria, viruses, and other pathogens, which eliminates its ability to multiply and cause disease. This is a superior alternative to traditional chemicals or disinfectants, which take longer to implement and considerably more labor to apply.

With airborne Legionella and cooling towers still making news headlines together, it is time for HVAC professionals to look into automated testing and treatment options that can identify and handle the problem before it becomes a news-generating event.