A toxic substance is plaguing the water we drink. The CDC estimates that 1 in 38 children ages 1 to 5 have harmful levels of lead in their bodies, which can result in a lower IQ and other permanent health issues.

Why is lead leaching occurring? How widespread is it? What can be done?

First, we must understand why lead is in our water infrastructure system in the first place. Lead plumbing has been used for thousands and thousands of years, due to its special characteristics of prevalence, durability and malleability. Piping systems containing lead can be found throughout the world, as well as most of the oldest cities in the United States, such as Philadelphia, New York and Boston. Once research showed a legitimate link between lead pipes and toxic poisoning in the 1920s, more and more U.S. municipalities prohibited the installment of new lead pipes, but many remain underground and in use.

Buildings (houses included) completed prior to 1950 are more likely to have a lead service line that delivers water, while buildings constructed between the 1950s and 1990s are likely to have lead contributors that also leach toxic lead into the water. Lead contributors include lead pipes, lead solder (commonly used with copper water pipes), galvanized pipes, copper alloy/brass fittings and copper alloy/brass fixtures. Ahead of January 2014, fittings and valves for American domestic water systems were permitted to have a maximum of 8 percent lead. Therefore, school facilities that are more than three years old should have their entire plumbing systems checked and analyzed for lead contributors, including the faucets, as soon as possible.

Lead: Trouble Ahead
It seems to be the most ironic and hypocritical nightmare: our schools are here to educate, but if the school’s water goes unchecked for lead, it may be contributing to learning disabilities and cognitive problems, which will stay with children throughout their lifetime.

The fear of dangerous amounts of lead leaching into drinking water is extremely real. In the summer of 2016, the Natural Resources Defense Council reported that a minimum of 18 million Americans get their water from drinking water systems with EPA lead violations. The report also stated that the “EPA sought penalties against only 3 percent of the lead rule violators.”

This has put our communities in jeopardy. Schools must rely on their maintenance team to check their water and pipe systems to ensure the water is healthy enough for consumption. However, unfortunately, many schools have been apathetic, placing plumbing upkeep toward the bottom of priority lists.

In the summer of 2016, The Washington Post published an article that discussed how most public school districts do not test their tap water for lead and how after the public reaction to the Flint, MI, water crisis, water testing laboratories started receiving more calls from schools on a daily basis.

According to the article, “Even though children and infants absorb more lead than the average adult, there are no real safeguards in place to ensure that the drinking water is safe at the facilities where most of their time is spent,” American Medical Association President Andrew Gurman said, referring to schools, in a statement.

Without legislation forcing schools to test for water, this leaves children completely vulnerable and families feeling helpless. It’s up to our schools to push for preventative action and protect their students.

What Can Schools Do to Protect Their Students?
We cannot continue to fail our youth, our future. Lead plumbing contributors must be eliminated like lead paint.

The first step is for schools to be vigilant. Plumbing needs a proactive mindset, not a reactionary mindset. The facility director or maintenance team leader needs to craft a routine preventative plumbing plan and immediately send tap water samples to an independent lab to test for unsafe levels of lead, copper and other toxic contaminants. Then, the maintenance team needs to collect detailed data on the health of the educational facility’s piping systems, and ultimately, a comprehensive analysis should be performed to determine if there are lead contributors in the system, as well as to determine if there are any leaks or mold, the estimated longevity of the pipes, what potential future problems lay ahead, etc. All pressurized and non-pressurized pipe systems need to be assessed.

If the school’s domestic water system reveals signs of aging, failures (such as discolored water, leaks and low flow) or lead contributors, then the pipes may have surpassed their useful life. If this is the case or when this is the case, there are generally two different options for large buildings or campuses, such as schools and colleges. 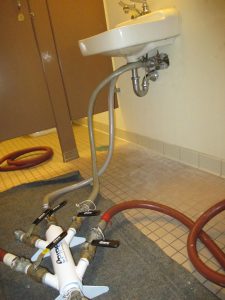 Pipe replacement (repipes) – A repipe project involves digging up and tearing out a pipe system, then replacing the pipes with new pipes. This extremely traditional process is very expensive, time-consuming, messy and disruptive to operations. Water will be turned off during a repipe and a school building would have to be unoccupied for the work to take place.

Pipe lining (epoxy coatings) –This innovative process utilizes existing access points to clean the interiors of existing pipe systems in-place (aka: without removing the pipes) and then push liquid epoxy through those cleaned pipes, creating a strong yet thin barrier coating that can bring lead leaching into EPA compliance as well as serving as a long-term solution against pinhole leaks, slab leaks, corrosion buildup, MIC buildup in sprinkler systems, rusty water and other common problems. Pipe lining is an eco-friendly pipe restoration method that prevents turning the school into a giant construction zone while greatly extending the rehabilitated pipe system’s useful life.

The Best Solution for Schools
While a rising numbers of school districts and colleges are concerned with their water quality, more and more are recognizing the many disadvantages of an inconvenient repipe and opting for pipe lining, instead. The key factors that create this preference are most often the lower cost and the fact that pipe lining can be performed while school is in session, during a short break or even during a renovation, whereas a repipe can take a building out of commission for months.

More than 40 different American educational campuses joined the ePIPE® LeadSmart™ program in 2016, which is a one-of-a-kind comprehensive educational and strategic program that assists building owners with bringing their domestic water’s harmful lead and copper levels down to EPA compliance. ePIPE uses a patented in-place process that uses clean, compressed air to push liquid epoxy through existing access points. The epoxy cures in as little as 90 minutes to form a very thin, yet protective barrier coating that not only greatly reduces lead leaching, but also serves as long-term protection against pinhole leaks, corrosion build-up, discolored water and other problems.

One of these projects completed by ePIPE, the world leader for restoring small diameter piping systems via epoxy coatings, clearly demonstrates the enormous and wide range of benefits to the educational arena. A progressive school district, which was regularly monitoring its schools’ lead levels, reached out to ePIPE in 2016 once officials realized the lead levels were steadily increasing for one school. The 29 buildings on this campus have mixed copper and galvanized domestic water systems, which also contain lead solder, as well as faucets and apparatuses with high lead content.

The ePIPE project was performed while the students were in school and during the school’s very short summer break. Due to the minimally-invasive approach of pipe lining, the ePIPE team’s work did not disrupt the students, staff or school operations at all. There wasn’t any destruction rendered on the buildings to conduct the work. Additionally, the ePIPE team replaced or added isolation valves to bring the buildings up to code.

For this project, almost three miles of piping was rehabilitated with the patented ePIPE epoxy coating process.

The school staff and district were extremely impressed with how the ePIPE process worked so efficiently, how economical it is and how the ePIPE project was executed with students on campus.

A high-ranking official for the school district wrote in a letter to the ePIPE team: “I would just like to express how pleased we were with the service. The project took about 3 months to complete as opposed to a conventional re-pipe which would have taken much longer and been much more of a disruption to staff and students and I might add, much more expensive. After the completion of the project we have administered extensive testing of the domestic water supply and I’m glad to report the problem has been eliminated.”

Before ePIPE’s help, this school’s lead levels were some 80ppb, which is eight times the World Health Organization’s (WHO) cut-off guidelines for lead, at 10ppb, and more than five times the U.S. EPA’s cut-off levels, at 15ppb. After ePIPE’s work, water samples taken at the school showed lead levels at less than the 1ppb cut off test level used in the testing procedure.

A lot of America’s piping infrastructure has surpassed its useful life. Instead of plumbing making day-to-day operations easier, it has become the center of main concern and the cause for distress for millions of people.

We all need to work together to get a firm grasp on lead leaching.

The unfortunate truth is that America’s pipes have been poisoning us for many years and they will continue to do so until all buildings and residences take action to protect their water from lead leaching. But schools, where our youngest and most vulnerable citizens spend the majority of their time, the persons responsible need to embrace their responsibility of providing their students with a safe environment by routinely testing their water for lead and protecting their water with pipe lining technology.

Amanda Strouse is on the marketing and public relations team for world-leading pipe lining technology innovator, ACE DuraFlo, the creator of the patented ePIPE product and worldwide group of installers that utilize the patented ePIPE process to restore pipes in-place. ePIPE has been chosen as the modern re-piping alternative by thousands of building owners and by the world’s leaders in the plumbing industry and are engineered to exceed EU and North American standards. For more information, please visit www.restoremypipes.com or call 800.359.6369.