For decades, traditional smoke detectors have been used to protect patients and personnel at healthcare facilities from the danger of smoke and fire – protection that is mandated by the NFPA (National Fire Protection Association).

Traditional Smoke Detectors
Traditional spot smoke detectors are installed in each room or space and connected to a central fire alarm panel by low voltage electrical wiring. When significant amount smoke accumulates in the chamber of one of these smoke detectors, the alarm sounds. Although there are addressable systems on the market that can identify the specific room where such a threat occurs, many are not addressable and so only identify the zone.

While spot smoke detectors are reliable and relatively easy to install, NFPA regulations also mandate annual inspection and testing of each unit. This tedious and time-consuming process requires a fire alarm contractor to enter each room, introduce smoke directly into the detector and verify that it functions properly. This is often covered under ongoing maintenance contracts where fire alarm contractors make a significant amount of their profit.

In a healthcare environment, however, this can be extremely disruptive to patients, doctors, nurses and hospital personnel. The problem is exacerbated in psychiatric wards or hospitals, or for those in drug recovery, that are potentially even more sensitive to interruptions. Surgical rooms, NICUs, PICUs and emergency rooms are also an issue, given the sterile environment.

“For our patients, anything out of the ordinary, such as loud noises, can set them off,” Robison explains.

Once he became aware the maintenance provider would be coming for an inspection, Robison says he would send out advanced notifications by e-mail to alert both personnel and patients, as well as to warn them of possible loud noise associated with testing.

He would then have to figure out how to ensure that staff and patients were out of the rooms at specific times – a process that often required some creativity.

“One of the things I would try and do is schedule inspections for mealtimes, when the entire unit would be in the dining room,” says Robison.

Aspirating Technology
In smoke detection, more advanced technologies that provide earlier warning detection exist. These systems work by aspirating – or drawing in air – from each room through small, flexible tubing. The air is then analyzed to identify the presence of minute smoke particles in a continuous process.

For almost 40 years, aspirating smoke detectors (ASD) have been used for the most sensitive applications where early detection of smoke or gas is critical, such as in cleanrooms, data centers and telecom facilities.

Among the pioneers in ASD technology was the VESDA (Very Early Smoke Detection Apparatus) system first introduced in the early 1980s by Xtralis. The company has since evolved that technology to offer a system that combines the reliability and early detection of VESDA with addressability in each room.

The system, called the VESDA-E VEA, consists of small, flexible tubes that draw air through small, unobtrusive sample points in each room. The air is analyzed using sophisticated laser-based technology at the central unit located within 300 feet. 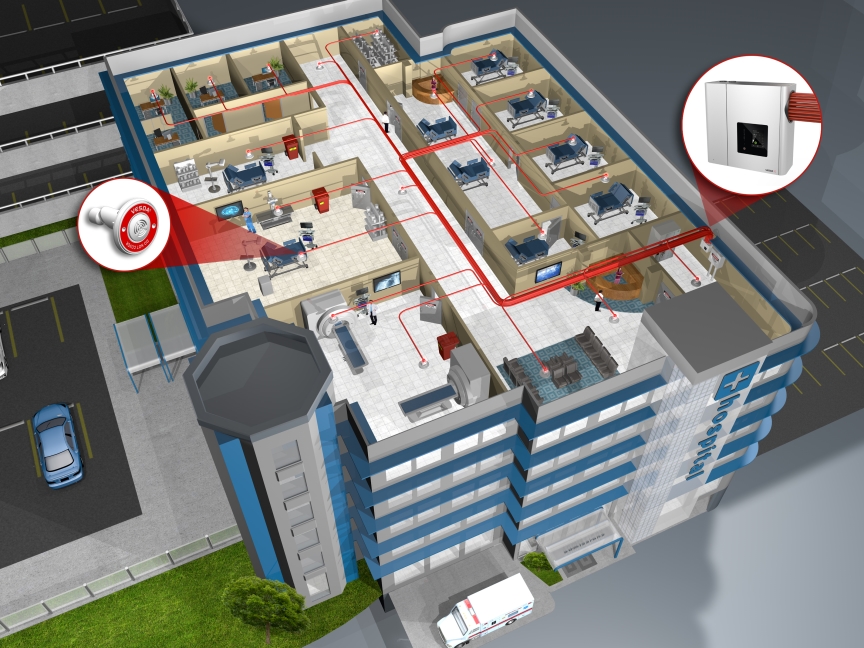 As a multi-channel, addressable system, the VEA central unit can pinpoint the location of the alarm. A single system supports up to 40 sample points and can be extended to 120.

For Robison of Sonora Behavioral Health, the addressability of the system had great appeal. He says the VEA systems was installed after it was specified by a consulting engineering firm during construction of a new building at the site in November of 2016.

“I like how, if a smoke detector goes off in room 401, it tells you there is issue in room 401,” says Robison. “I don’t have to go through the entire unit, checking every one until I finally come across it.”

The system is also sophisticated enough to allow for three levels of sensitivity to differentiate a fire from a patient smoking in a room, for example. This further minimizes disruption by reducing false alarms.

Even with these benefits, one of the primary advantages of an aspirating smoke detector system is its ease of maintenance, inspection and servicing.

In compliance with NFPA 72 Chapter 14 requirements, systems like VEA do not require the contractor to enter each room. Instead, servicing and testing can be performed at the central unit and only takes a few seconds per sample point. In this way, the fire alarm contractor can complete the inspection at any time without having to move patients or access restricted areas.

Finally, since the VEA sample points are much smaller than regular smoke detectors, they appear less obtrusive. They can also be placed where spot smoke detectors would be difficult to reach, such as high ceilings, in restricted areas, or where new electrical wiring installation would be costly.

“As someone that works in the industry, when I walk through a building I’m looking at the all various fire alarm devices that are on the walls and ceilings,” explains Callander. “The VEA sampling points have a small footprint; you might not even notice them.”

Sampling points can even be fully concealed, for instance behind ventilation covers or within fixtures, eliminating any hygiene issues.

Callander first utilized the VEA technology as part of a fire alarm system upgrade his company completed at the Courage Kenny Rehabilitation Institute at Abbott Northwestern Hospital, which provides services for people with short and long-term conditions, injuries and disabilities, and a newly renovated emergency department. The project involved installing five total VEA systems: two each on two separate floors and one in the behavioral health section of the new emergency department.

“The VEA system is a new technology for us, but the [aspirating] early detection technology has been around for years,” adds Callander. “The VEA will detect a few particles of combustion faster than a spot smoke detector. It is also harder to tamper with the sampling points, which can be important for behavioral units.”

He also adds that smaller sampling units are more hygienic because they have less surface area than smoke detectors.

Because of the ease of installation, maintenance, inspection, servicing, and the reduction in a smoke detection system’s total cost of ownership, aspirating smoke detectors are an excellent alternative to spot smoke detectors. The added benefit of minimal disruption to patients and personnel make them a perfect choice for healthcare facilities.