By adding these wall systems, they are not only personalizing and enlivening drab spaces, but also improving the learning environment while eliminating a major source of routine maintenance and re-painting.

These systems are essentially constructed of a fabric covering that is stretched over a durable backing material using a mounting frame. Once installed, the fabric wall is rugged enough to withstand considerable impact and abuse – and versatile enough to deliver a variety of key benefits for both students and administrators.

One benefit is that fabric wall coverings are “tackable,” meaning students can staple or tack a virtually unlimited number of notices, announcements and banners in hallways and common areas without the surface degrading.

In classrooms, tackable surfaces are ideal for posting classwork and recent projects. In dorm rooms, tackable fabric walls allow students to tack up personal items and posters to liven up their living spaces without destroying the walls.

Another benefit is that these same systems also improve the learning environment by providing noise reduction barriers. Because the core of the wall coverings absorbs noise and reduces echoes bouncing off of bare walls, students are able to focus with fewer distractions from exterior noise.

Already installed in some of the biggest and most well-known K-12 schools, colleges and universities throughout the United States, the fabric wall coverings provide another significant advantage from a maintenance perspective by reducing the need to constantly maintain, patch and re-paint interior walls.

“A lot of teachers like to display student work as inspiration, and some teachers staple student work or study aids to the classroom walls from floor to ceiling, which can require some touch up,” says Brad Heinecke, a maintenance technician at Orange Lutheran High School.

However, when staples, tacks or tape are used as a fastening method this inevitably takes a toll on painted walls. This necessitated repainting each classroom every 2 to 3 years. To do such work including touch-up in this and other areas, the school once employed a full-time painter.

The first rooms to get fabric walls were several foreign language classrooms. The initial plan, says Heinecke, was to just install a large bulletin board, but there were so many items being posted in each classroom that the plan became more ambitious.

So, the high school opted instead to install fabric wall coverings on at least two of the walls in these classrooms using 5’ high panels from Fabricmate Systems, a global supplier of wall surface solutions.

According to Heinecke the school was sold on the concept after conducting some of its own scratch tests on the fabric as well as stapling tests on the backing using samples provided by the supplier. He says Fabricmate even brought in samples of fabric and invited everyone evaluating to try and stain it with various food products or substances. When Fabricmate washed and tested the fabric no stains remained.

Installation was easy as well. With the help of one other person, Heinecke installed the system. “Once you get the process down, it goes up pretty quick,” he says.

Heinecke says the fabric covered wall system is holding up extremely well in the classrooms.

“We’ve been really happy with the fabric wall covering system so far,” says Heinecke. “The walls in those classrooms probably had 500 staples put in them so far this year with no noticeable damage. The backing even withstands the impact of hammer type staplers.”

Orange Lutheran has since installed additional fabric wall coverings in an enclosed high traffic hallway and designated it as the spot for students to post items.

“We had a lot of issues with painted walls, with kids putting up posters and everything,” says Heinecke. “We now have the fabric wall coverings in a couple of hallways. That is where they staple all their announcements, banners, and posters.”

As for the future, Heinecke says the school just ordered more of the fabric wall coverings for additional classrooms. Administrators are also planning to add a 2’ border beneath the current fabric wall in the main hallway to increase the tackable space and add wall protection to eliminate the need for re-painting.

“Everyone is seeing how great the wall coverings are, and are requesting installation this summer,” says Heinecke.

Improving Communication
Universities are on board with the concept as well. Titus Botezan, President of Titus Enterprises, a school contractor based in California, says he has installed Fabricmate wall coverings at the University of Southern California (USC) in large common areas such as study rooms and community centers. Such rooms typically involved the installation of more than 40 linear feet of tackboard.

“Students and teachers like how the fabric wall coverings allow tacking up items in virtually any configuration with no damage or mess,” says Botezan.

The fabric wall coverings are widely used in dorm rooms, where students enjoy the creativity of being able to tack up and arrange inspirational photos, posters, or personal items on the wall.

When used on the outside dorm room doors, they also make a convenient place to post memos, reminders, or invitations. When used in dorm room common areas, they become community bulletin boards, or can even serve as decorative themed graphic panels.

Botezan says he is aware of a recent project at UCLA, where fabric wall coverings were installed in hundreds of dorm rooms. The University of Wisconsin, New York University and Kansas State University also uses such fabric walls throughout their campuses, to name just a few.

Bare painted walls are an acoustics nightmare. They cause sound to reverberate, making it difficult for students to hear properly, especially in crowded classrooms. In fact, most classrooms have a speech intelligibility rating of 75 or less, which is the equivalent of missing every fourth word. 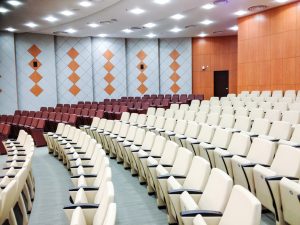 This can be taxing on students, as well as teachers, and make it difficult to focus, particularly for students learning English as a second language or those with learning disabilities.

To counter this, the fabric wall covering’s backing absorbs sound rather than reflecting it. This reduces echoes and reverberations and makes it easier to hear and understand speech or audio with greater clarity. The backing comes in various thicknesses (1/2”, 1”, and 2”) that determine its acoustic ratings, which range from 50% to 95% noise reduction effectiveness.

In a Glendale School District project for a new school that was being constructed, Botezan says he was asked to install the Fabricmate system in every classroom on two floors.

“The main purpose for installing the fabric wall coverings was acoustic,” says Botezan, who notes that the project took about two weeks. “We used a ½” backing but covered an extended surface.”

“The system delivers real acoustical benefits,” explains Botezan. “It absorbs sound and eliminates most of the echo in the classrooms. When we were done installing it, we could really tell the difference in each room.”

Fabric Maintenance
When school administrators want to refresh the walls or even change the colors, the replacement process is surprisingly easy.

The fabric can be replaced by school maintenance personnel and the only cost is for the new fabric itself. The backing and track system do not typically need to be replaced.

For schools and universities that want to leave fabric repair and replacement to the manufacturer, particularly if the product is used in many areas of the campus, warranty programs exist for both school districts and universities. In one such program from Fabricmate, for example, the company will replace up to 15% of the installed fabric under the warranty.

Del Williams is a technical writer based in Torrance, California. He writes about business, technology, health and educational issues, and has an M.A. in English from C.S.U. Dominguez Hills. For more information, call 866.622.2996; email fmsales@fabricmate.com; visit www.fabricmate.com; or write to Fabricmate Systems at 2781 Golf Course Drive, Unit A, Ventura, CA  93003.