In recent years, there has been a significant increase in complaints and legislative action against school districts across the nation for inadequately planning for the needs of the children and staff with mobile disabilities. Referencing the Americans with Disabilities Act (ADA), parents and advocacy groups are calling out school districts for their lack of planning or their reliance on antiquated protocols that call for leaving children and staff with disabilities behind in “rooms of refuge” and hoping that first responders will get there on time. The “Room of Refuge” protocol is no longer viewed as a viable plan for most events that require an evacuation of the school.

Three initial questions to ask when determining the preparedness of a school’s facility are:

If “no” is the answer to any of these questions, the school in question and its students are at risk.

A universally pressing concern for school administrators and board members is the safety of students and staff. A factor that heightens this concern is the recent enforcement of policies under the Americans with Disabilities Act (ADA) that require special measures to be put in place to ensure the safety of individuals with disabilities. All schools should strive to meet these requirements but, unfortunately, few do.

Lack of ADA Compliance in School Safety Measures
A problem seen over and over again in schools in the United States is a lack of compliance with ADA policies, which dictate that individuals with disabilities must not only have access to school facilities, but that they can safely be evacuated in the event of an emergency. With new and proposed legislation furthering the scope of policy requirements, there is no better time than now for schools to begin equipping themselves to meet these standards. An example of such legislation is a bill introduced by Rep. Donald M. Payne, Jr. of New Jersey called The SAFE in Our Schools Act. This piece of legislation would require states to ensure that their schools meet the standards set forth in the U.S. Department of Health & Human Services’ 2010 Children and Disasters Report when applying for state homeland security grants.

In 2013, the U.S. Department of Justice faulted a school in New Rochelle, New York for violating the Americans with Disabilities Act by failing to transport two students in wheelchairs during an evacuation drill. With all of the elevators shut down for the drill and no plans or equipment in place for the emergency evacuation of individuals with mobile disabilities, the students were forced to wait on the third floor of the building while the mobile students were evacuated.

Furthermore, several other parents and students have filed similar lawsuits against schools in recent years. Since 2012, parents and students in California, Ohio, Minnesota, New Jersey and Nova Scotia have filed suit under the ADA claiming that their schools’ evacuation plans illegally discriminate against disabled students. Failure to comply with ADA policies comes with severe consequences, as proven by these numerous examples. However, when it comes to meeting the requirements of the Americans with Disabilities Act, the majority of schools today would fail. The legal actions taken due to the lack of ADA compliance demonstrated by schools across the nation should serve as a wake-up call when developing school safety plans.

Expect the Worst-Case Scenario
Over the past few years, the U.S. has experienced a record number of destructive natural disasters and, sadly, an increase in man-made disasters such as bomb incidents, creating new worst-case scenarios that must be considered in the evacuation planning and equipment required to execute the plan. When developing evacuation plans and drills, emergency planning professionals must plan for the worst.

According to the National Association of State Boards of Education, there are currently no nationally adopted emergency management standards for schools. With no strict guidelines set in place, schools are left to set their own standards for risk management and evacuation preparedness and often face the consequences that come with a lack of preparation.

A recent example of inadequate emergency preparations in a school is Plaza Towers Elementary School in Moore, Oklahoma, whose tragic lack of a storm shelter during a devastating EF-5 tornado proved fatal for seven students. In response to this disaster, the state of Oklahoma conducted a survey revealing that 61.5 percent of schools in the state, with a combined population of 500,000 students, did not have a safe area or shelter of any kind, nor did they have the ability to move those with mobile disabilities to safety. 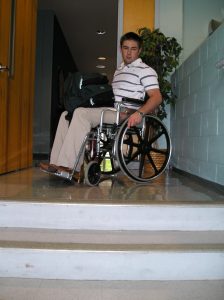 It seems as though it always takes a disaster of this scope to open the eyes of administrators and parents to the importance of emergency planning. If schools could be proactive about emergency preparedness rather than reactive, future disasters could be handled much more efficiently and countless lives could be saved. The bottom line: If your plans and equipment address the worst-case scenario, you are covered on the rest.

Keep Up-To-Date Evacuation Protocols
Having an evacuation plan in place is a vital aspect of planning for emergencies. Beyond that, maintaining the relevancy of these plans as updates are made to common protocols is very important. An example of one updated protocol is the “shelter-in-place” practice that has unfortunately been proven as antiquated after being responsible for many deaths during the 9/11 attacks, Hurricane Katrina, and Tornado’s in Missouri and Oklahoma.

ADA compliance is an important aspect of evacuation protocols. The first step toward achieving ADA compliance for an educational facility is understanding the requirements. The standards, last updated in 2010, include accessible pedestrian routes, general site and building elements, special rooms, recreation facilities, ability to evacuate and a variety of other specifications ensuring the proper accommodations for individuals with special needs or disabilities.

Do Not Rely on the Norms of Your Location
When it comes to preparing for disasters, individuals and organizations cannot simply rely on what generally happens in their geographic location; they must be prepared for a variety of disasters, both natural and man-made. For example, almost one-fourth of all significant tornadoes occur in Tornado Alley, yet the vast majority of high fatality tornadoes in recent years have occurred in areas such as the southeastern United States where tornadoes are an especially rare occurrence. Stay informed of the types of emergencies likely to affect specific regions to ensure readiness for the unexpected.

Ensure Facilities Have the Equipment to Support Crisis Plans
In large-scale evacuation scenarios, having the right evacuation equipment is critical. Schools should choose a manufacturer that will partner with an individual or organization to assess actual needs, provide accessible and intuitive equipment and properly prepare them for the worst-case scenario. A good practice is to avoid carry and wheeled devices, which can be dangerous for individuals while evacuating through debris-filled hallways. The most versatile and effective evacuation equipment consists of non-lift slide devices that can evacuate patients both vertically and horizontally.

Be Realistic in Training & Drills
Preparing for emergencies by maintaining up-to-date protocols and deploying the best equipment is critical. Once these are in place, running realistic training and drills has proven to save lives in the event of an emergency. Drills should assume that the worst-case scenario has occurred, no first responders are on their way, and the students and staff—including those with disabilities—must be evacuated from the building. This type of realistic environment will test your plans, equipment and staff while truly preparing schools for a disaster situation.

Last year in Oklahoma City, the mother of a student who is confined to a wheelchair became concerned when her daughter was not included in a fire evacuation drill at her high school. During the drill, a teacher instructed the girl to stay on the second floor and wait until teachers or coaches could carry her down the stairs. The Oklahoma City Fire Department then responded with another plan in which the daughter would wait in the stairwell until fire fighters arrived on the scene. Both the school’s and the fire department’s plans did not adequately prepare for the reality of an emergency evacuation scenario. The proposed plan addressed a best-case scenario where the danger was not imminent and the single child could wait for first responders to come and carry the child to safety. It did not address getting the child to safety prior to an event (i.e. tornado) where mobile students and staff are moved to safety. Nor did the plan address post-event evacuations, where seconds and minutes matter, or area wide disasters, where first responders cannot come to a single school.

A key question to be asked in the development of evacuation plans is, “if it is ‘safe enough’ for a child with a mobile disability to stay behind and wait, why are the mobile students being evacuated?” In other words, the safety of each student should be prioritized equally in evacuation plans.

While the guidelines established by the Americans with Disabilities Act are very useful for maintaining accessibility for individuals with disabilities, it is vital to consider them just one facet of an overarching facility safety plan that addresses the needs of every student and staff member. It is in this way that ADA compliance factors in to overall emergency preparedness. Most of the updates and special installations required by the ADA are beneficial not only to students with disabilities but to the entire student body and school staff as well.

The benefits of ADA compliance and school safety precautions are numerous: saving the lives of students and staff, ensuring the inclusion and safety of individuals with disabilities, avoiding legal repercussions from parents or the government, and making an investment in the local community by guaranteeing the safety of its residents. While the lessons learned from past disasters are reason enough, the real motivation to prioritize school safety and ADA compliance should be a desire to proactively safeguard students and staff from potential harm.

Clifford Adkins is a safety expert, CEO and founder of ARC Products, LLC, a leading manufacturer of cost-effective evacuation solutions. Adkins invented the Med Sled®, the first sled evacuation product on the market that currently holds three U.S. patents for its design. Since 2004, ARC has been developing products to support disaster preparedness and emergency evacuation to ensure that non-ambulatory individuals are transported safely in emergency situations. Visit www.medsled.com for more information.