Emergency lighting is mandated by the NFPA and International Building Code (IBC) to ensure sufficient light along the path of egress in the event of a power outage or other emergency. Although this is typically the domain of electrical engineers, many lighting designers and architects prefer to meet these requirements with aesthetic solutions that fit into the building’s overall design.

Dedicated emergency lighting, however, is often seen as utilitarian, obtrusive and even ugly. One of the most common, low cost options involves two lamps and a bulky battery pack that is often referred to as a “bug-eye” light.

At the top of this list is incorporating existing architectural lighting in the emergency lighting plan. In this approach, the architectural lights operate as normal. If utility power is lost, however, supplemental power can be supplied via an inverter.

“Our goal, if at all possible, is to have the architectural lighting system also double as the emergency lighting system,” says John Decker, IALD of Lighting Design Studio, a multi-disciplinary firm. The company has completed lighting projects for a variety of commercial spaces, including resort hotels, spas, casinos, restaurants, retail and office spaces.

While this approach is ideal, there are many situations in which the existing lighting will not provide the requisite illumination along the entire path.

When this occurs, lighting designers often seek out more high-end, stylish fixtures. Even items as bug-eyes and exit signs are available in versions that are more aesthetic.

“The look is very important,” says Decker. “It may seem small, but it could make a difference in how you experience that space and everything is ‘an experience’ with architecture,” explains Decker, who is a trained architect. “So we try and find aesthetic alternatives to maintain the beauty of the space while still meeting code requirements.”

Stylish Emergency Lights
Although typically the responsibility of electrical engineers, Decker says this doesn’t mean architects and lighting designers do not have a role to play. He often reviews and comments on proposed emergency lighting solutions.

When a modern, streamlined look is required, Decker says he often recommends products from emergency lighting manufacturers that specialize in high-end alternatives. 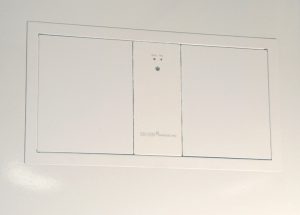 This can include more stylish versions of bug-eye lights, as well as a variety of options that keep emergency lighting out of view until needed. Some are even designed to blend in with the existing décor by being painted or covered with wallpaper.

Decker points to Isolite, a manufacturer of specification-grade emergency lighting products. The company offers the Genie, along with a more compact version called the Mini Genie, that remain fully recessed behind two flat panel doors. If power is lost, the fully automatic, battery-powered units open up to light the way. 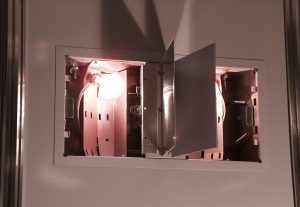 “The Isolite products look so nice and clean,” says Decker. “You don’t have to see a bug-eye on the wall, but in emergency loss of power, the doors open and the lamps pop out to do their work.”

The company also offers recessed LED emergency lighting mounted 18” above the floor. The product directs light to the floor to more effectively illuminate the path of egress than traditional ceiling or wall mounted emergency lights.

Even exit signs can be designed with a stylish and modern architectural look. Isolite offers a variety of LED and photoluminescent exit signs, as well as a hybrid of both technologies that is actually one of the most energy efficient models ever produced.

Powering Existing Architectural Lighting
When it comes to the selecting the power delivery systems, such as inverters or generators that will be used, the lighting designer plays no role. Electrical engineers select inverters based on load capacity and size, often with assistance from electrical distribution firms.

“The engineers put together the electrical design but are not responsible for the costing, so distributors play an important role working with them to deliver products that will produce a positive result for all involved,” says Ron Doyle of specialty electrical distributor Wiedenbach Brown.

In the case of inverters, the units are often installed in a nearby electrical room. The unit is then wired to the specific architectural fixtures that must continue to operate if power is lost.

Given the increasing use of LEDs in architectural lighting, Doyle says it is also important to select a unit that incorporates pure sine wave technology.

Pure sine wave inverters provide cleaner, utility grade power than modified sine wave models and work better with LED drivers. In addition, pure sine wave models have a high surge capacity, which means they are able to exceed their rated wattage for a limited time to meet the high inrush currents of LED’s.

Because back-up power is so closely tied to emergency lighting, providers such as Isolite often offer both fixtures and inverters. According to Doyle, he has specified smaller inverters from Isolite appropriate to the square footage and load requirements of the commercial spaces Wiedenbach Brown typically serves.

“The inverters have enhanced features and a pure sign wave output,” says Doyle, adding that Isolite was a leader in the development of that technology in emergency lighting.

The inverters can be sized to meet a variety of load requirements from small 125-watt units to full building power up to 18,000 watts. The smaller units have wiring schemes that allow for two independently controlled circuits with breakers, with larger units allowing for more.

“There is a value to that design because it gives you the flexibility to control the light fixtures so they are ‘on’ all the time, ‘off’ all the time or to turn it on and off as needed,” says Doyle.

The inverters can also be controlled through a unique web interface that allows a facility manager to monitor multiple inverters at the same time as well as set alarms and automatic notifications. The system also conducts and records data related to the regular monthly tests required by code.

Jeff Elliott is a Torrance, Calif.-based technical writer. He has researched and written about industrial technologies and issues for the past 20 years.