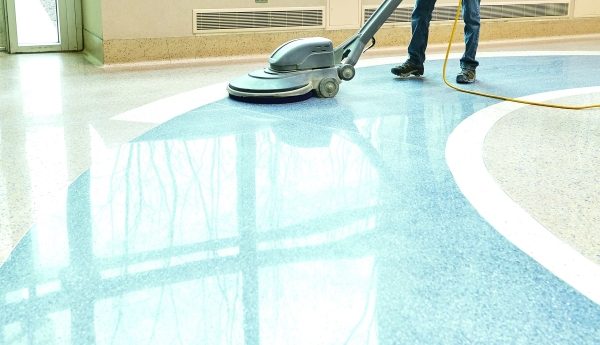 With more than 11,000 square-feet of terrazzo flooring, facility management at Henderson City Hall wanted an alternative to the traditional waxing process. More importantly, they were looking for a consolidated cleaning solution that increased product efficiencies and reduced labor in order to save costs.

Since the implementation of the 3M™ Stone Floor Protection System, Henderson City Hall has been able to significantly reduce costs; overall, the transition has saved the city approximately 25 to 30 percent on labor, resulting in an expedited return on investment.

Located approximately 15 miles from Las Vegas and just west of Lake Mead and the Hoover Dam, Henderson is the second-largest city in Nevada, with an estimated population of more than 302,000. Built in 1963, Henderson City Hall is the center of all government and city activities and accommodates numerous departments including the city council, municipal court and public works.

Henderson City Hall provides residents and businesses with direct access to a variety of essential public services such as ambulance, police, water and sewer, and is home to a large number of full-time and part-time employees resulting in heavy foot traffic and frequent use of meeting rooms and common areas.

Situation
Due to the influx of people to Henderson City Hall, the cleaning process required floors to be cleaned and/or coated each month because of its tendency to easily scuff. Additionally, the custodial service team had to strip the buildup of floor finish on an annual basis in order to maintain aesthetics.

Having already successfully partnered with 3M to consolidate the city’s chemical selection to reduce dozens of SKUs and simplify training and inventory management, the building’s Custodial Manager, Mark Chiangi, looked to 3M for a comprehensive floor care solution.

3M Solution
Chiangi and his team ultimately decided to switch the cleaning and protection process for the terrazzo flooring to the 3M™ Stone Floor Protection System because it provided an entire cleaning system with a shorter implementation process than the competitive set. The product also significantly decreased labor costs, as it didn’t need to be applied as frequently as other floor systems.

When compared to other competitive products on the market – some of which require eight steps – the 3M™ Stone Floor Protection System is easy to execute and involves only two steps. After the product is in place, ongoing maintenance consists of reapplying the protector once every six to nine months. Additionally, the 3M™ Stone Floor Protection System eliminates the need to scrub and recoat, as the protector can last two years before needing to strip and reapply.

Result
Since the implementation of the 3M™ Stone Floor Protection System, Henderson City Hall has been able to significantly reduce costs because the system is less labor intensive and eliminates the need to buff or scrub the floor on a weekly basis. Overall, the transition has saved the city approximately 25 to 30 percent on labor, resulting in an expedited return on investment.

Another key result of the city’s switch to the 3M™ Stone Floor Protection System was its positive effect on the building’s overall aesthetics. Remarkably, the product was able to bring back the terrazzo floor to its natural appearance while simultaneously enhancing clarity and shine. The protector has also increased floor traction, providing a safe walking space for city hall employees and visitors.

“The selling point for us was that we brought the terrazzo floor back to a natural state and put a guard over it, instead of having to use chemicals for shine,” said Chiangi. “Staff and visitors who have walked the areas we’ve done so far have definitely noticed a difference and consistently remark about the level of shine and clarity.”

Restore. Protect. Maintain.
The 3M™ Stone Floor Protection System is a complete floor care process that restores the natural beauty of porous stone and produces a remarkable, long-lasting shine. An easy-to-use solution with environmental features, the product reduces the need for stripping or deep scrubbing and creates a high-traction gloss that can help reduce slips and falls.