Even before Amtrak began the renovation of the National Guard Building, which would become its new 82,000 sq. ft. headquarters in Washington DC, the national railroad was determined to create a state-of-the-art facility. Its goal was to create one of the most modern and sophisticated telecommunications systems available.

To create one of the most modern and sophisticated telecommunications systems available today in order to meet its present and future telecommunications requirements. Among the highest priorities was a converged network capable of providing high-bandwidth and wireless connectivity for up to 500 users housed throughout the four floors of newly remodeled office space.

The solution Reale recommended for the new facility was a GPON (Gigabit-capable PON) fiber network, a high-speed version of basic PON that provides high-bandwidth in both directions. GPON is a more robust form of increasingly popular PON networks that are composed of point-to-multipoint fiber conducted through unpowered (passive) optical splitters.

One of the significant savings in using the passive optical network (PON) was gaining a considerable amount of space from what would have been utilized for telecom rooms.

Even before Amtrak began the renovation of the National Guard Building, which would become its new 82,000 sq. ft. headquarters in Washington DC, the national railroad was determined to create a state-of-the-art facility. Its goal was to create one of the most modern and sophisticated telecommunications systems available today in order to meet its present and future telecommunications requirements.

Among the highest priorities was a converged network capable of providing high-bandwidth and wireless connectivity for up to 500 users housed throughout the four floors of newly remodeled office space. A fiber optic network was the obvious choice to achieve these requirements so Amtrak and its consulting engineers selected passive optical LAN due to its affordability, reliability, long life, and reduced power consumption.

Passive optical fiber networks (also known as PON, POL, GPON and OLAN) are widely recognized as a solution for eliminating data bottlenecks and leveraging cabling infrastructure with unlimited bandwidth potential. They are also simpler, hence easier to configure and with a smaller in footprint. In addition, they are capable of protecting high-security communications through advanced data encryption. Plus, they provide major cost savings over traditional networks, are easily expandable, and are greener with significantly fewer energy and cooling/ventilation requirements.

“GPON is transforming the Amtrak IT ecosystem into a highly resilient and scalable network aligned with future technology objectives,” says Richard Thompson, Director of Network Engineering at Amtrak.

In order to undertake this project, Amtrak chose VT Group, a global systems integrator that undertakes contracts ranging from C5ISR afloat projects to fully integrated networks for commercial, hospitality, government, healthcare, and transportation clients, as its collaborating partner on the project.

“Amtrak already had some experience with passive optical networks at some of its passenger stations, including Chicago and Baltimore,” explains Aaron Reale, RCDD and Director of Operations at VT Group, who designed the Optical Networks installed at those locations in recent years.

After reviewing all major manufacturers, Reale and his colleagues determined that OCC (Optical Cable Corporation), pioneers in fiber optic cable, could provide its newly released and UL listed Slimline Hybrid cable solution for the project within the strict timelines required.

The solution Reale recommended for the new facility was a GPON (Gigabit-capable PON) fiber network, a high-speed version of basic PON that provides high-bandwidth in both directions (e.g. 2.48 GB/s of downstream and 1.24 GB/s upstream). GPON is a more robust form of increasingly popular PON networks (also known as POL, passive optical local area networks) that are composed of point-to-multipoint fiber conducted through unpowered (passive) optical splitters.

“This GPON solution is truly cutting edge,” Reale explains. “We use cable containing a single strand of single-mode fiber capable of providing hundreds of users’ unlimited bandwidth. People often think that fiber optic cabling is fragile but it has a tensile strength almost three times that of traditional category 6 copper cable and it’s a fraction of the size and cost.”

These passive networks enable enterprises to simultaneously converge multiple services such as data, VoIP (voice over internet protocol), video conferencing, building security, management services, and wireless devices – applications that are today choking many enterprises’ copper- or Ethernet-based telecommunications capabilities. In addition, similar to optical services such as Verizon’s FIOS, these networks can easily be expanded simply by adding nodes to a cable containing a single strand of fiber.

For GPON solutions, the use of single-mode fiber (rather than multi-mode) fiber optic cable ensures that these networks will be able to handle future requirements easily with an unprecedented 100+ terabits of data transmission capability.

“This is significant because many communications electronics have a cycle of approximately five years. Many communications devices require added bandwidth to handle increased traffic and applications,’ says Mike Long, LEED GA, and Sr. Network Consultant for OCC. “The single-mode fiber solution is considered “future-proof” because in many instances it is capable of handling added loads for decades to come.”

Optical LAN technology is gaining significant market share in recent years. In addition to Amtrak, VT Group has deployed GPON connectivity to classified government projects, healthcare and corporate facilities, and at some of the largest resorts in North America.

“A few years ago, nobody even knew GPON was a viable option but now it makes up a significant portion of our business,” Reale explains.

Power Challenges
In the case of Amtrak HQ solution, maximum uptime and reliability were of paramount importance. Because of this, a hybrid fiber/copper infrastructure was the solution.

“Because Amtrak has operations at many historical sites, such as Baltimore’s Penn Station and Washington Union Station, the company has too often experienced highly disruptive power outages. Our design eliminates this risk by consolidating all fiber and power cabling for all telecommunications to a single, protected space with fully redundant battery backup,” says Reale.

While it is possible to incorporate copper wire into the same cable jacketing as the fiber, finding a manufacturer to supply the hybrid cable within a tight time frame can be an obstacle. In this case, the construction schedule was further tightened just before the cable was required to be installed. This put added pressure on VT Group to find a workable solution.

Reale found that none of Amtrak’s traditional cable suppliers could meet the turnaround requirements. Having worked with OCC on many projects in the past, he contacted the company and found that they were flexible enough in their operations to ensure the materials could be manufactured prior to the official P.O. and could have everything arrive ahead of schedule.

“The turnaround requirement was our biggest challenge,” Reale says. “OCC was able to do it; in fact, they delivered the cable about 10 days early allowing us to get ahead of the construction schedule.”

The finished product is a single strand of bend-insensitive single-mode fiber that will provide unlimited bandwidth, plus two 18-gauge copper wires to carry electrical power to each work area outlet. The 18-gauge copper is slightly larger than today’s requirement; it was designed so that no matter what happens in the future, the conductors will be able to handle it.

“If telecom technology keeps advancing at the rate it has, and we need to power something that exceeds the current Class 2 standard, this design will support it,” Reale explains.

Because of the inherent drop in voltage that occurs over copper wire, Reale’s team also incorporated digital electricity to enhance transmission performance. This emerging technology combines DC power and data into packets, which are transmitted and received in a manner that is somewhat analogous to how information packets are conveyed over networks.

“Digital electricity allows us to push power out to much longer distances without having to plan for the normal voltage drop – and without having massive copper wire size,” says Reale. “We incorporate this technology into our designs when centralized power is a must and on projects when the facility’s design doesn’t support traditional cable lengths – such as rail stations, airports and sports venues.”

Saving valuable space
While Amtrak’s new headquarters are expansive, every inch of space has been accounted for operational use. One of the significant savings in using the passive optical network was gaining a considerable amount of space from what would have been utilized for telecommunications rooms. 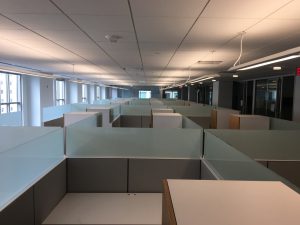 “Traditionally with a four-floor space like this, we design eight 10×12-foot telecommunications closets, build out with racks, cabinets and other equipment,” Reale explains. “Each closet requires a UPS battery backup, plus additional HVAC cooling because of the addition of concentrated heat within the space. Putting that all together involves a lot of setup costs and a lot of recurring costs.”

“Instead, just one telecommunications closet with two racks will support all the users; significantly reducing the footprint,” Reale continues. “Real estate prices in Washington DC make this a very expensive space, so any additional square footage that we can give back for operational use is immense in the long term. So, rather than taking up 1,000 sq. ft. for telecommunications closets this system is taking up just 100 sq. ft. And the rest of the system utilizes much smaller pathways and light loads to distribute connectivity throughout the entire facility.”

In order to eliminate the additional telecommunications rooms, VT Group designed and built customized Zone Enclosures, which mount above the ceiling and act as infrastructure distribution nodes.

While GPON technology has been around for a few decades and used heavily by the large telecommunications carriers, many stakeholders are just beginning to become familiarized with its benefits in an enterprise local area network.

“It has really only received meaningful attention recently,” adds OCC’s Long. “However, it is the right long-term solution for many of today’s companies and more designers and users are seeing the ROI and other gains that can be realized by adopting it.”