The technology, which draws in air samples through flexible tubing to a central testing location, has been used for decades in sensitive applications such as cleanrooms and data centers where early smoke detection is critical.

As an example, one system, called the VESDA-E VEA, by Xtralis, a global provider of aspirating fire detection equipment, draws air through small, unobtrusive sample point in each room.  The air is analyzed using sophisticated laser-based technology at the central unit to identify the presence of minute smoke particles in a continuous process.

This approach offers earlier detection than even photoelectric technology detectors.  The system can detect minor particles in the air much faster, even before a fire begins to flame and burn.  In many cases, early warnings can speed evacuation and prevent fire spreading to other areas.

As a multi-channel, addressable system, the VEA central unit can also pinpoint the exact location of the alarm.  The use of multiple levels of alarm, set at specified concentrations of smoke, can also ensure time to investigate the alarms and make decisions.  This facilitates safe evacuation and reduces the risk of unwanted sprinkler or suppression system release.

Unlike unsightly traditional smoke detectors up to 7” in diameter, the VEA’s sampling points are about the size of a quarter and can be concealed behind ventilation covers or within fixtures, making them inconspicuous to facility occupants and visitors.

The aspirating approach is also much easier to maintain.  Unlike traditional spot detectors which must be tested individually and can be compromised by accumulation of dust and dirt, aspirating systems can self-clean and detect any blockages or breaks in the tubing.  Such systems not only stop false alarms due to dust or dirt contamination of sensors, but also can distinguish between smoke, fire, and other airborne contaminants, which further reduces nuisance alarms.

Mandated annual National Fire Protection Association (NFPA) inspections are also simplified.  Unlike traditional smoke alarms, systems like the VEA do not require testing of each detector by introducing smoke directly into the chamber.  Instead, the tests can be conducted at the central unit.

A Host of Commercial Facility Applications
While traditional spot smoke detectors have been common in commercial applications, a growing number of such facilities are successfully turning to aspirating detectors for a variety of reasons.

Hospitals and Healthcare
While spot smoke detectors are relatively easy to install, NFPA regulations mandate annual inspection and testing of each unit, which can be disruptive to patients, doctors, nurses and hospital personnel in a hospital and healthcare environment.  This tedious, time-consuming process requires a fire alarm contractor to enter each room, introduce smoke directly into the detector and verify that it functions properly. 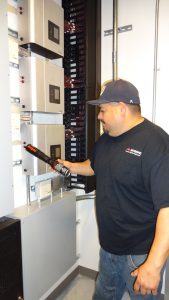 For Jeremy Robison, Facilities Director/Safety Officer at Sonora Behavioral Health of Tucson, AZ, the annual inspections required significant planning.  “For our patients, anything out of the ordinary, such as loud noises, can set them off,” Robison explains.

In compliance with NFPA 72 Chapter 14 requirements, systems like VEA do not require the contractor to enter each room, which made Robison’s job easier.  Instead, servicing and testing can be performed at the central unit and only takes a few seconds per sample point.  In this way, the fire alarm contractor can complete the inspection at any time without having to move patients or access restricted areas.

Museums and Historical Structures
To preserve the aesthetics of historic buildings like palaces and castles, while protecting lives and precious artifacts from fire, it is important to avoid the intrusion of bulky, traditional smoke detectors in every room.

With this in mind, the Waterhouse Building in London, one of Britain’s most striking examples of Romanesque architecture and home to one of the most important natural history collections in the world, turned to aspirating technology.  The small discreet detectors, in fact, can be hid behind light fittings, blended in with ceiling paintings, or form part of ceiling sculptures to provide virtually “invisible” smoke detection.

“As one of the UK’s most popular museums, the Natural History Museum has a responsibility to ensure the safety of visitors and staff,” says Kevin Rellis, Head of Estates Projects. “Protecting against the risk of fire is key, and with VESDA we have ensured that we have the best possible coverage to safeguard the museum for generations to come.”

Ultra-Modern Facilities
At the other end of the spectrum, sleek modern facilities often feature minimalist architecture where bulky spot smoke detectors look strikingly out of place.  As such, there is a premium on making smoke detection blend in with the surroundings instead of clash with it.

A high-profile project for a new state of the art sports performance center at a prominent Pac 12 university required a smoke detector that was less obvious, even concealable, according to Bob Pritchard of Convergint Technologies, a company that designs, installs and services integrated building systems including electronic security, fire alarm and life safety systems.

“The designers and the architects responsible for this remodel didn’t want to see any safety devices sticking out of the ceilings,” explains Pritchard.  “It was very important for them to see as minimal impact as possible.”

Such aspirating systems are also being utilized nationally at universities for a sleek look and high-performance smoke detection, including at Clemson University’s state-of-the-art

Airports
Chief among the challenges of protecting airports from fire are massive open spaces such as terminals, baggage halls, hangars, and warehouses where smoke is diluted.  Detection is further complicated when air is moved or removed by HVAC systems.  However, with the lives of passengers and the logistics of connecting flights on the line, such systems must give as early a warning as possible.

So, Delhi Airport Terminal 3, a transportation hub with the capacity to handle 34 million passengers annually, turned to aspirating technology.  With eight levels 28 meters above the ground laid over four square kilometers, the terminal has more than 90 automated walkways and 78 aerobridges.

VESDA by Xtralis was specified for Delhi Airport Terminal 3 because of its advantages in protecting large, open spaces where smoke is diluted.  The system continuously samples air to detect even the smallest smoke particles, preventing a small fire from becoming a major incident.  The system buys time to investigate an alarm and initiate an appropriate response to prevent injury, property damage or business disruption. 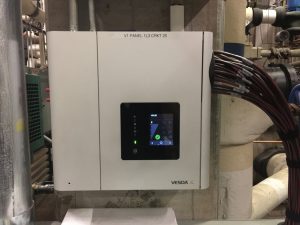 Because VESDA detectors are highly sensitive and include a multitude of sampling points that can be placed where smoke is most likely to travel, they excel at detecting diluted smoke – unlike conventional point and beam detectors.

“Because of the new terminal’s design with multiple levels, we knew VESDA would meet our unique system design requirements,” explains Mr. I Prabhakara Rao, CEO of Airport Development, GMR Group, the developer of Delhi Airport Terminal 3.

Trains and Tunnels
When metro lines and subways transport passengers underground and through tunnels, the limited emergency exits and escape routes make early fire and smoke detection critical.  This is complicated by air movement from passing trains, drafts, and air conditioning that disperses smoke, as well as accumulated dust, humidity, and pollutants that can trigger false alarms with traditional smoke detectors.

To protect the lives of passengers and prevent business disruption, a growing number of transportation administrators are utilizing aspirating smoke detectors in train and tunnel applications.

With flexibility in design, continuous air sampling is possible in a wide variety of locations including on ceilings, under floor voids, across return air intakes, as well as in cable ducts and electrical equipment cabinets.  Along with multiple configurable sensitivity threshold settings, this allows very early warning for investigation, and additional warnings for escalation, allowing an appropriate response plan, evacuation or suppression.

Because such systems can be self-cleaning and easily monitored from a central location, they are highly resistant to dust and dirt contamination, which dramatically reduces false alarms.  In addition, some systems can also combine the detection of smoke and gases (CO, NOx, etc.), which can also be a danger at platforms, tunnels, and confined spaces.

Prisons
In prison housing and treatment center cells, traditional fire detection technology installed in the return air chase or ductwork can become compromised by accumulated dirt and grime.  This requires maintenance personnel to climb into the ducting to clean the smoke detector and restore it to full functionality.  The process is so tedious and time consuming that one fire protection specialist estimates it would require a full-time technician at a cost of $120,000 per year to clean all the smoke detectors in the system as needed.

To keep these systems fully operational, facilities such as Corcoran State and Kern Valley prisons with the guidance of the California Department of Corrections and Rehabilitation (CDCR) are installing alternative smoke detector technology that is self-cleaning, requires minimal maintenance and eliminates the nuisance alarms.

This aspirating technology has already proven successful in reducing the maintenance required.  Each tube is self-cleaning and the system detects any blockages or breaks in the tubing.

“The VEA aspirating system is set to clean itself every seven days,” says Patrick Neff, Manager of the Bakersfield, California Branch of Building Electronic Controls, a leading independent fire life safety firm with experience in the corrections industry.  “Even if dust enters the tubing system, the filters for all the sampling points are located at the central unit in a restricted area, and only take a minute to clean.  There is no need to crawl to duct to get to the detector.”

Protecting the Commercial Facility Bottom Line
Some managers of commercial facilities may be prone to use spot smoke detectors because of their familiarity with such traditional systems.

However, those who take advantage of the superior capabilities of aspirating detection systems will not only protect lives, property, and reputation to a degree not previously possible in commercial settings, but also prevent serious liability and litigation in worst case scenarios.