The Centers for Disease Control and Prevention (CDC) reports that more than two million people contract antibiotic-resistant infections each year, with at least 23,000 dying as a direct result from the infection and many more people dying from their complications (CDC 2013). Healthcare associated infections (HAIs) kill more people in this country than AIDS, breast cancer and auto accidents combined.

The most dangerous HAI pathogens are those that have the potential to spread by air (Kowalski 2006). Therefore, source and pathway management should involve airborne transmission and especially enhanced methods of its control even though the primary route is considered to be direct contact.

Other pathogens, such as Methicillin-resistant Staphylococcus aureus (MRSA), are now called “superbugs” because they are virtually invincible to standard drug treatments. According to the CDC and World Health Organization, antibiotic-resistant HAIs are on the rise.

Important to note here is that science has not found a microorganism that is resistant to the destructive effects of the UV-C 254-nm germicidal wavelength, including superbugs and any other microbes associated with HAIs.

There are four methods used to reduce the concentrations of airborne infectious agents: dilution, filtration, pressurization and disinfection. 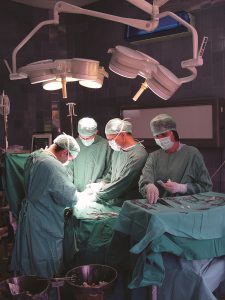 Current design guidelines suggest up to 25 supply air change rates (and up to 5 of them as outdoor air) for new facilities, depending on the space served. Most airborne pathogens originate from patients and transient occupants; increasing supply air beyond 25 ACH result in diminishing returns.

Pressurization
Pressurization protects against cross contamination from the infiltration of air from one space to another. This is of great importance in healthcare settings, but it is very difficult to control. Frequently opened or propped open doors are all too common making corridors, etc., a conduit of contaminated air to other spaces.

Air handler design resistance is the sum of all pressure losses through the system, including elbows, dampers, filters and coils, etc. For instance, as filter resistance increases, system air volume is reduced. But, like the filter, it’s also very common for the HVAC coil pressure drop to increase, even double, which will result in a higher system pressure drop as well. A higher coil pressure drop can negate pressurization techniques and permit the infiltration of contaminated air.

Measuring the pressure drop across a coil and comparing it to as-built design data – or better, the manufacturer’s coil performance data – is one way to determine a potential loss in airflow. If the coil is fouled (common) and air pressure compromised, the 2011 ASHRAE Handbook – HVAC Applications recommends the installation of UV-C lamps to clean the coil to as-built and keep it clean continuously.

Disinfection
In addition to opening and propping open of doors as a contaminant transfer mode, the entering and exiting of people also provides a contaminant source. It’s known that the concentration of airborne bacteria is proportional to the number of personnel in the room (Mangram et al. 1999, Duvlis and Drescher 1980, Moggio et al. 1979, Kundsin 1976). The World Health Organization (WHO 1988) recommends a limit of 100 cfu (colony forming units)/m3 for bacteria and 50 cfu/m3 for fungi for sensitive areas. There are no published cfu standards in the U.S.

While the use of UV-C equipment, or disinfection, to control infectious agents in healthcare settings is one of its oldest uses, today the technology is cited as under-utilized.

Upper Air/Room
The primary objective of upper-air UV-C placement is to interrupt the transmission of airborne infectious diseases in patient rooms, waiting rooms and other known microbial pathways such as lobbies, stairwells, laundry chutes, and emergency entrances and corridors, all of which can be effectively and affordably treated with UV-C (ASHRAE 2011). Airborne droplets containing infectious agents can remain in room air for 6 minutes and longer. Upper Air UV-C fixtures can destroy those microbes in a matter of seconds. Because they operate 24 hours a day, upper-air systems notably reduce the potential viability of surface microbes that settle out of room air!

Humans are the source of airborne agents, which infect people (Nardell and Macher: ACGIH 1999). Again, upper-air systems intercept microbes where they are generated, thereby controlling them at the source (First et al. 1999). They have been shown to be effective against viruses and bacteria, including chickenpox, measles, mumps, varicella, TB, and cold viruses (source control). Studies of Mycobacterium tuberculosis have shown that upper air systems can be equivalent to 10–25 air changes per hour (CDC 2005).

Measles and influenza viruses and the tuberculosis bacteria are diseases known to be transmitted through shared air between infected and susceptible persons. Since the 1930s (Wells 1955; Riley and O’Grady 1961) and continuing to the present day (Miller et al. 2002; Xu et al. 2003; First et al. 2007), numerous experimental studies have demonstrated the efficacy of upper-air UV-C. In addition, effectiveness has been shown for reducing measles transmission in a school, and influenza transmission within a hospital (McLean 1961).

HVAC Systems
HVAC systems provide an excellent growth area for mold and some bacteria in and around cooling coils; drain pans (Levetin et al. 2001), plenum walls and filters. Growth of these microbial deposits also leads to coil fouling which increases coil pressure drop and reduces airflow and heat exchange efficiency (Montgomery and Baker 2006). As performance degrades, so does the quality, amount and pressurization capability of air supplied to conditioned spaces (Kowalski 2006/2009).

Because hospital codes call for high-efficiency filters to be located downstream of the cooling coil, they can become damp and often wet from saturated air. As such, air filters themselves are considered a growth medium for mold and bacteria and an infectious-disease agent reservoir. ASHRAE recommends UV-C lighting to be installed downstream of the cooling coil; so if a 360 degree UV-C system is installed there, it will disinfect both the coil and the filters, as well as kill infectious diseases in the airstream. For example, up to a 35 percent kill ratio and more of many infectious agents is possible (Kowalski 2009).

UV-C installations are a simple, effective, and relatively inexpensive means of reducing concentrations of airborne and surface pathogens that can cause healthcare associated infections.

Within patient rooms, waiting rooms, and other congregational areas, upper-air UV-C units will kill airborne microorganisms that inherently circulate into their irradiation path. When UV-C lamps are installed within HVAC systems, cooling coils are kept clean and filter surfaces are disinfected, all while providing supplemental kill ratios in airstreams. Recent guidance from ASHRAE and published technical articles in HVAC trade publications provide healthcare and facility engineers with the resources needed to size, select, install, operate and maintain UV-C systems.

Managing member of UV Resources and past director of Farr Company, Forrest Fencl is an ASHRAE Fellow, formerly an ASHRAE Distinguished Lecturer, and a member of the International Ultraviolet Association and the Illuminating Engineering Society. He may be reached at forrest.fencl@uvresources.com.