Many facilities built in the ’70s and ’80s continue to operate and maintain aging induction-based air conditioning units originally installed in each room or space. Not to be confused with fan-driven systems, these quieter, more efficient alternatives have no fans, blowers or moving parts and so can continue to operate for decades.

However, as these units inevitably decline in efficiency, facility owners and managers are faced with a critical decision: upgrade to modern induction units or embark on an extensive, costly renovation project to overhaul the entire HVAC system.

While both options have merit, many are opting for the lower capital costs and relative simplicity of replacing existing induction units with modernized versions that are quieter and more efficient due to recent advances in design.

Others have no choice, given the limitations of space within the existing structure that preclude installation of additional air handlers or extensive ductwork required with all-air systems.

The Renaissance of Induction Technology
Induction-based HVAC technology is enjoying a renaissance that is largely attributed to the recent interest in “chilled beam” systems. Although traditionally installed in ceilings, chilled beams can also be installed in walls, floors and soffits.

Induction systems work by forcing primary (outside) air supplied by central air handlers through specialized nozzles in individual units located in each room or space. By doing so, a “free jet” flow of air is created that induces the secondary air inside the room to also be drawn into the unit, often around 4 times the volume of the primary air.

Now at a much higher combined CFM, the secondary air (after flowing through a heat exchanger where it is cooled or heated) is mixed with the primary air. This is accomplished using hot or cold water, which is why these are often referred to as air-water systems.

Hospital Upgrades
Originally built in 1972, Greenville Memorial Hospital, the flagship hospital of the Greenville Health System (GHS), was still operating 322 induction units in 267 patient rooms and support spaces. Given that the units were 45 years old, the hospital’s Engineering and Facilities Development teams felt it was time for an upgrade to a newer more efficient alternative.

“Although the induction units had been well maintained, and had operated well for 45 years, they were operating at less than full capacity,” says Curt Hall, P.E. principal engineer for Facilities Development at Greenville Health System (GHS).

GHS, an academic health center with seven inpatient hospitals and more than 100 outpatient facilities and affiliated physician practices, has a footprint that stretches out over approximately six-million square-feet in over seven counties. According to Hall, the Facilities Development group oversees capital projects, new construction, renovations, moves, and acquisition of facilities.

For the Greenville Memorial Hospital project, Hall says the engineering group discussed several alternatives, including a central overhead air system, and fan coil units. However, these would have required installing new air handling units, extensive ductwork changes, and other utility system alterations. All required additional space the hospital did not have and so were quickly ruled out.

“We ended up deciding to stay with the induction units,” says Hall. “The decision was driven by the structure of the existing building and what it would allow us to do.”

An additional motivation was to reduce energy costs associated with the building’s central air handlers, which were being run at higher pressures to deliver the primary air to the aging induction units.

After careful consideration, the engineering group decided to embark on a project to replace the 322 existing units. The project is being completed in increments, with a priority placed on patient rooms, as rooms become available. On average, the conversion takes two days per room to complete.

Induction units are extremely energy-efficient and can be operated in three different operating and flow modes using advanced technology. This includes normal mixed/displacement airflow operation, pure displacement, and a variation for rooms with higher occupancy levels (for example, conference rooms) and a “boost mode” for rapid temperature adjustment after a long weekend, etc. 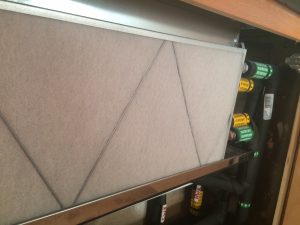 Having identified the best available units for the hospital, Hall and his team began the project. To date, over 90 of the new induction units have been installed, and already there have been noticeable benefits.

To start, the new wall units are providing 300-400 CFM of air, up approximately 35% from the previous units. In addition, the more efficient units reduced the workload on the two relatively new primary air handlers that had been installed in 2013. Although both were capable of a fairly high discharge pressure, operating at 7-8 inches of pressure, they also consume more energy at the higher pressures.

“We won’t see the full benefits until we replace them all, but with a third of the units installed, we have been able to reduce the pressure on each of our air handler units by 1-2 inches of pressure,” says Hall.

Hall is also impressed with the ultra-low sound levels at which the units operate.

“The new units deliver a higher air change rate, and they do it quietly,” says Hall. “We have found that a quieter environment helps patients recover quicker.”

For Bosch, a German multinational company that is one of the largest suppliers of automotive parts in the world, the goal was to replace approximately 1,500 aging induction units at its headquarters building in Gerlingen-Schillerhöhe, Germany.

The office complex was built in the late 1960s with individually controlled induction units in the rooms, which were supplied with air from central ventilation systems.

The project was motivated by a desire to reduce energy costs as well as a long-term goal to reduce the company’s carbon footprint dramatically by 2020.

To accomplish this task, the Bosch’s Facility Management Group examined various air conditioning approaches. Led by group manager Tobias Lorson, the company engaged in tests with several manufacturers after which they were convinced that modern induction devices could reduce energy demand by up to 40%.

“A lot has changed in [induction] technology since the building was built,” says Lorson.

Lorson was particularly impressed with induction units that were capable of providing variable airflow options as opposed to the fixed, constant volume of air from the original units installed in the building.

“The devices do not suffer the disadvantages of the old induction units,” explains Lorson. “In mixed source ventilation, the air is not blown against the window front, but diagonally up into the room. For cooling, this leads to strong mixture of the cold supply air with the hot air close to the facade, so the target temperature can be reached at a lower air speed.”

With all this considered, there can be considerable savings due to greater control.

“With these devices, we can especially save air when single offices are empty during business trips and during holidays, when open-plan offices are not used entirely or when meeting rooms are not fully occupied,” says Lorson.

Gerhard Seyffer is the President of LTG Incorporated. He has a master’s degree in Mechanical Engineering and more than 25 years of experience in the HVAC industry. For more information, email sales@ltg-inc.net; phone 864. 599.6340; or visit www.ltg.de/us/.