More and more facility managers are being challenged to control building energy costs and enhance their property’s “green” reputation. In a typical building, almost 40 percent of the energy consumed is used for cooling and heating, according to data from the Department of Energy. In a typical water-cooled chiller plant, the chiller itself typically accounts for most of the energy consumption. That’s why reducing chiller energy consumption is a major factor in controlling energy costs–and cutting carbon dioxide emissions produced by the utility when generating electricity to power the chiller.

Using a chiller that incorporates variable-speed drives (VSDs) can lower energy costs and shrink a building’s carbon footprint. That’s because VSDs, also known as variable frequency drives (VFDs) or DC inverters, can cut a chiller’s annual energy use by 30 percent. The proven success of applying VSDs on chillers is why the U.S. Environmental Protection Agency (EPA) recommends installing VSDs on centrifugal chillers to allow the chiller to run at lower speeds under part-load conditions, thereby yielding a higher efficiency than is typically achieved by ordinary centrifugal chillers that control part-load operation with inlet vanes.

Knowing the basic ins and outs of chiller design and off-design operation can help facility managers understand how a VSD chiller can meet their energy challenges.

Part-load efficiency is part of a chiller’s energy story
One factor that impacts chiller energy consumption is the cooling load (capacity). Chiller plants are designed to remove enough BTUs per hour on the hottest days of the year–their full-load design point. But facility managers know that the amount of time a chiller spends at full load is very short, perhaps only 1 percent of all operating hours.

As their name indicates, VSDs slow the motor speed on the chiller at lower loads. Whenever a VSD can be slowed to match lower capacity requirements (and this may not always occur depending on the chiller operating profile), energy consumption can also be lowered–by as much as 15 percent shown in the accompanying diagram.

This sharply contrasts with constant speed chillers, which typically accommodate less-than-full loads by closing their pre-rotation or inlet vanes to regulate the flow of refrigerant. This is like maintaining the speed of your car by pressing the gas pedal to the floor and controlling the speed with your other foot on the brake.

The thermodynamics of lift has a profound impact on a chiller’s energy consumption (see diagram showing 66 percent energy savings due to reducing lift). Chiller load is the amount of cooling the chiller provides, while lift determines how hard the chiller must work to deliver the cooling. The greater the difference between evaporator and condenser pressures, the greater the lift and the more work the compressor must perform. By reducing the lift, more energy savings can be realized. 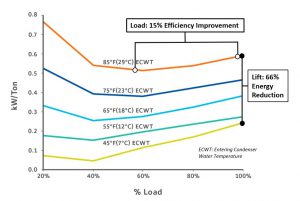 Lower lift is an opportunity for significant energy savings. But these savings can only be achieved if the chiller can take advantage of low-lift conditions, such as using 55°F (12°C) or 45°F (7°C) tower water temperatures with full condenser water flow, which are 20°F (-7°C) or 30°F (-1°C) colder, respectively, than the 75°F (23°C) tower water typically allowed by traditional chillers.

Reducing load and lift yields speeds up payback
When a VSD chiller can leverage the efficiencies obtainable when operating with reduced load and lift, the energy savings quickly recoup the additional investment in VSD technology.

In many installations, a VSD chiller that can take advantage of these off-design conditions achieve a payback in less than a year or two—plus, the operating savings will continue for years after the VSD has paid for itself.

From a reliability standpoint, if a VSD chiller ever loses power, it can be restarted in just a few minutes. By contrast, a constant speed chiller can require 30 minutes to cool down and be restarted.

It’s also worth noting that the slower speed of VSD chiller motors means less noise. This reduces and can possibly eliminate the cost of sound-attenuating equipment, as well as enhance tenant comfort.

Constant speed chillers are designed for efficiency at design full load and design entering-condenser-water temperature. In the real world, chillers rarely operate under those conditions. Under low-load and low-lift conditions, YORK VSD magnetic-bearing chillers, for example, can operate at 0.10 kW per ton and lower.

With numbers like that, facility managers can count on VSD chillers to meet challenging energy budgets and green goals to satisfy both property owners and tenants.

Fred Berry is Chiller Portfolio Manager for Chiller Solutions, Building Technologies & Solutions, Johnson Controls. You can reach him at John.F.Berry-EXT@jci.com.