Among the common misconceptions about air filtration technology is that air filters with superior particle capture efficiency do not always have good energy efficiency and vice-versa. Air filters do have an effect on both indoor air quality (IAQ) and the energy consumption of a building’s HVAC system. But the two do not have to be mutually exclusive, especially if filters with electret-treated media are used.

Air filters made with non-synthetic filter media rely solely on the four mechanical particle capture processes described above. On the other hand, air filters made with synthetic, nonwoven filter media can take advantage of the same mechanical processes, along with a major enhancement: an electret charge. Advantages of the Electret- Charged Filter Media There are a number of benefits to imparting an electret treatment to synthetic filter media with a robust underlying mechanical structure. First, electret-treated synthetic media can be manufactured to provide high initial and high sustained efficiency over the filter lifecycle. Filters that are designed to provide only mechanical efficiency begin their life at their lowest particle removal efficiency and rely on the building of the dust cake in the filter to increase efficiency. Second, the filtration efficiency of electret-treated synthetic media has been demonstrated to be unaffected by relative humidity and by long-term warehousing at high temperatures (130oF), meaning the electret effect resists age-related decay during storage and use. 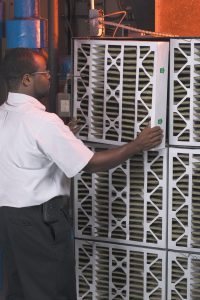 Third, and most importantly, the electrostatic effects created in an electret-charged synthetic media are particularly useful for increasing the capture efficiency of submicron particles. While submicron particles are much smaller than the void spaces present in most commercial electret-charged media, the electrostatic forces within the media structure allow those particles to be removed with high efficiency. These submicron particles – which are under 2.5 microns in size – are most likely to travel to the deepest part of the lungs, where they can cause a variety of respiratory health problems.

Fine particles are designated as E1 and E2 particles under the ASHRAE 52.2 Test Standard, which is used to evaluate the filtration efficiency of filters. Filters tested under ASHRAE 52.2 are assigned a Minimum Efficiency Reporting Value, or MERV, based on their ability to filter particles of differing sizes between 0.3 and 10.0 microns in diameter.

When evaluating filters, be careful not to confuse the filter’s MERV and E1/E2 efficiencies with the results of the Standard’s Appendix J (Optional Method of Conditioning a Filter Using Fine KCL Particles), which should be reported as “MERV-A.” This Appendix was created to address the interest of critics of ASHRAE 52.2, who were concerned that air filters featuring an electret charge performed at high filtration efficiencies during initial testing while their filtration efficiencies could decline in actual use. This optional method does not represent actual use conditions at all.

The Energy Equation
In addition to their particle capture efficiencies, filters made with electret-charged media can allow for more energy-efficient operation of a building’s HVAC system. That is because electret-charged synthetic media typically delivers lower airflow resistance in the same filter construction as a mechanical-only filter. This translates into reduced energy consumption and costs.

Mechanical-only filters tend to create significant drag or resistance, because their filtration mechanisms cause disruption of the particles in the air stream. The more resistance there is the more energy is needed to push air through the filters. Lower airflow resistance and reduced energy consumption also mean filters with electret-charged media can help reduce greenhouse gas generation – a wise sustainability strategy.

Because energy costs are the largest component of an air filtration system’s lifetime cost (at about 81 percent), it is imperative for facility managers to look beyond the line item purchase price of filters when seeking to reduce overall costs.

In another attempt to reduce air filtration costs, some facility managers may be tempted to delay filter change-outs. But the small amount of money saved by reducing air filter purchases pales in comparison to the energy and operating costs that can be saved with a robust air filter maintenance program. That is because delaying filter change-outs causes the HVAC system to run more days at peak airflow resistance and energy use. It does not take long for peak energy use cost to offset any savings in filter purchases.

One way to lessen the frequency of and purchase costs related to filter change-outs is to choose a high-capacity pleated filter with an extended filter life that provides the desired filtration efficiency at the lowest possible airflow resistance.

Effects on Building Occupants
The EPA estimates that poor IAQ may cost the U.S. tens of billions of dollars each year in lost productivity and medical care. Research suggests that poor IAQ significantly influences the occurrence of communicable respiratory illnesses, allergy and asthma symptoms, and sick building symptom. Consider these statistics:

Providing superior IAQ can improve health, work performance and school performance, as well as reduce health care costs, and consequently can be a source of substantial economic benefit, and filters with high E1 and E2 efficiencies are critical for providing good IAQ. From reduced energy and HVAC operating costs to improved IAQ, there are many good reasons to consider air filters made with electret-charged filter media.