Are We Over-Disinfecting With Disinfectants?

In March of this year, facility managers throughout North America began purchasing as many sanitizers and disinfectants as possible. That’s when it became clear COVID-19 was invading our shores, with the possibility that hundreds if not thousands of people would become infected.

We now know the situation, at least the U.S., is far worse than anyone could have imagined back in March.

Some areas of the country reopened in May, after a nearly complete shutdown of nonessential businesses. This included not only restaurants and bars but also commercial office buildings and other commercial facilities.

But now, COVID-19 is surging and many of those businesses are closed once again. The reasons for the resurgence vary. Either the communities reopened too soon, their residents were not taking the necessary precautions to protect their health, people did not realize the seriousness of the disease, or a combination of all three.

In many parts of the country, this means we are back to square one, reevaluating where we failed and what might have gone wrong. One area that is being closely scrutinized is cleaning. Most building managers, along with cleaning professionals, believed using the right sanitizers and disinfectants – and plenty of them – would kill the pathogen, prevent the spread of infection, and keep people healthy.

This is a well-intentioned but possibly knee-jerk reaction that can prove detrimental in the long run. It’s conceivable the use of all these disinfectants was not needed and, worse, provided managers and building users with a false sense of security.

An extreme example of a possible knee-jerk reaction recently occurred in Spain. To help slow the spread of the infection in a coastal town, government authorities sprayed a disinfecting solution made of bleach over 1.2 miles of a beach.

The World Health Organization did suggest that using the solution might kill the virus and help stop the spread of the disease. But according to one observer, what appears to have happened is that it just “killed everything on the ground, plants and insects.”

This poignant story tells us that as facility managers and cleaning professionals reevaluate cleaning going forward, they must reconsider the widespread use of disinfectants and use them only where and when needed. This is referred to as “justified disinfection.”

Concerns About Disinfectants
A sanitizer or disinfectant’s role is to minimize or kill pathogens on a surface. Pathogens can cause disease when we touch contaminated surfaces and then touch our faces or food that is later consumed. Disinfecting reduces this risk.

Common areas where we encounter pathogens include door handles, bathroom faucets, and other frequently and commonly touched surfaces and controls in a facility. These are known as “transmission points” and they need to be disinfected.

But disinfectants are being applied to some surfaces in a facility where large amounts of disinfectants are not what we would call transmission points. These includes common-area floors such as in hallways, walls above a certain level, and even ceilings.

In many cases, due to COVID-19, disinfectants are being applied to areas where we’ve never used them before, such as furniture, books, storage shelves, and pictures on walls as well as wall coverings. This means that we are likely overusing disinfectants, which can cause many more problems than facility managers and cleaning professionals may realize.

Issues we should be aware of include the following:

Disinfectants are costly. Disinfectants are powerful solutions that must meet very rigid standards and guidelines in North America. To ensure their effectiveness and that they meet these guidelines, considerable time and research are involved in their development. This increases costs, which are passed on to the end-customer. 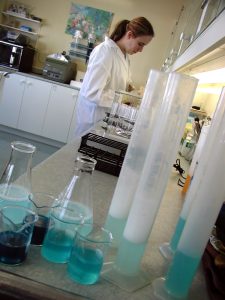 Disinfectants do not clean. For a disinfectant to be effective, the surface must be cleaned first with a cleaning solution. Very often this is all that is needed to remove health-risking pathogens from a surface. After the surface has been cleaned, a disinfectant can be applied – if necessary – allowing it to kill any pathogens that may remain on the surface.

Pathogens are becoming disinfectant-resistant. With widespread use, pathogens become resistant to these disinfectants. Whereas they were initially effective at killing pathogens, over time, the efficacy of the disinfectant is reduced.

This is precisely what is happing today with antibiotics. The Centers for Disease Control and Prevention (CDC) says that antibiotic resistance to specific infections is one of our biggest health concerns in the U.S., resulting in more than 35,000 deaths each year.

Disinfectants are already known to be harmful to the user and the environment, especially if misused; increasing their potency would likely make things worse.

So, what are our options? Among them are the following:

Disinfect where needed. Only disinfect “high-touch” surfaces that are touched frequently by many people in a facility.

Limit disinfecting routines. Some facilities have developed programs where high-touch areas are disinfected several times per day. In most cases, this is not necessary. High-touch surfaces should be disinfected once or twice per day.

Disinfect properly. Surfaces usually must be cleaned first and then disinfected – two steps. Disinfecting without cleaning limits the usefulness of the product. Also, follow manufacturer’s instructions as to use, dilution, and dwell times.

Emphasize effective cleaning. Cleaning is the actual physical removal of soils and pathogens from a surface. For most areas in a commercial facility, cleaning is all that is needed. According to the CDC:

Most, if not all … surfaces need to be cleaned only with soap and water … depending on the nature of the surface and the degree of contamination. The actual physical removal of microorganism and soil by wiping or scrubbing is probably as important – if not more so – than any antimicrobial effect of the cleaning agent.

Reconsider cleaning solutions. Many facilities are now transferring to new cleaning technologies such as products made using biotechnology. These are environmentally preferable cleaning solutions. When used on surfaces, they degrade soils, residue, and grease so these contaminants can be easily removed. As a further benefit, the cleaning products continue working for several hours after they have been applied to a surface, helping to keep surfaces clean and healthy.

There is one more concern about disinfectants that we touched on earlier but that needs further discussion. Although they have served us well, most traditional disinfectants as well as products such as sodium hypochlorite (bleach) can be very harmful to the user and the environment.

Dr. Claudia Miller, an immunologist and coauthor of Chemical Exposures: Low Levels and High Risks, notes, “The rush to disinfect is well-intentioned. But this can be a hazardous proposition.” Because of their impact on the user and the environment, she goes on to say, “we’re creating another [health] problem for a whole group of people and I’m not sure we’re actually controlling infections.”

Based on her comments, the reemergence of COVID-19 in many parts of the country, and what we have discussed here, it is clear we must reevaluate our cleaning routines, and use disinfectants as sparingly as possible. We may have more to lose by using them than we have to gain.

Steve Teasdale is Co-Founder and Vice President of Scientific Affairs at InnuScience, a global leader in environmentally preferable commercial cleaning solutions based on biotechnology. He can be reached at info.us@innuscience.com.