In 2020, Oregon City School District 62 began renovating Candy Lane Elementary’s 1960s-era facilities. The project focused on improving safety and security from the fence line to the heart of the building. This focus included increasing access control in the central hallway to help keep faculty and students safe during school hours.

To support project goals, the main office was relocated to be closer to the school’s main entrance. Its layout was also reconfigured, so staff faced forward towards the interior hallway, making it easier to welcome students and carefully monitor who is entering and exiting the building. However, the new location and configuration presented a few challenges.

Straddling the school’s main hallway and its entry vestibule, the interior doors and windows of the front office needed to have a fire rating to satisfy code requirements. While not yet code driven, the district wanted to provide the Candy Lane community with the utmost security, so it opted to select glazing components that could also help resist violent intruders. Lastly, because these doors and windows give students, families, and visitors one of their first impressions of the school, they had to help convey a warm and welcoming atmosphere. To fulfill these goals, the architects turned to multifunctional, fire-rated glazing assemblies that feature compatible forced entry and bullet-resistant components.

When architects use systems that incorporate compatible components, they know the multiple protective qualities of the glazing assemblies will function as intended in the field. Taking this approach can help any project that needs fire, forced entry and bullet resistance sideline potential complications during design and after installation. Using Candy Lane Elementary as an example, the following will discuss common pitfalls to specifying multifunctional fire-rated assemblies and how systems with compatible components can act as an access control solution.

Using Multifunctional, Fire-Rated Systems With Compatible Components
It may be tempting to think that creating multifunctional fire-rated systems is as simple as combining fire-rated components with forced entry and bullet resistance rated ones since, at their core, this is how these systems are built. However, it should be noted that testing standards often do not take into account other forms of protection – fire-ratings do not test for forced entry or bullet resistance and vice versa. This can lead to components that compromise or even negate the level of protection the other ones offer.

For example, many of today’s ballistic and forced entry products are plastic based and are unable to meet fire-rating testing standards. In fact, the rate and intensity with which these products burn could significantly reduce the level of protection fire-resistive components offer. If the two were combined into one assembly, the ratings would not be entirely accurate, putting the safety and wellbeing of building occupants at risk.

The Candy Lane Elementary renovation avoided this dangerous outcome because the systems within it combine multiple products with proven track records to create a reliable fire and security solution. The assembly’s frames offer a 120-minute fire rating, which has an inherent level 8 bullet resistance according to UL 752 standards. The glass resists forced entry, meeting H.P. White 5-aa1 and ASTM F1233 Class 1.4 standards, which means in testing, after being shot, the systems could defend against violent attacks for over 12 minutes. It also incorporates a fire-rated glazing material that provides 120 minutes of fire resistance. In application, the two glazing components work together to provide a significant amount of access control and the code required fire protection for those within the building.

Because the assemblies feature multiple, compatible, and proven products, designers know that the components will not compromise one form of protection for another. This can streamline the specification process by reducing the amount of research necessary to build a multifunctional fire-rated glazing assembly, allowing architects to focus on designs that support the mental wellbeing of occupants in addition to their physical safety. For school settings in particular, buildings that positively influence psychological wellbeing have been linked to higher student test scores.

Additionally, as a 2018 report from the American Institute of Architects (AIA) notes, facilities that have open and visually connected spaces not only support mental wellness but can also contribute to crime prevention through environmental design (CPTED). This can reduce maintenance and repair costs associated with student-caused damages. 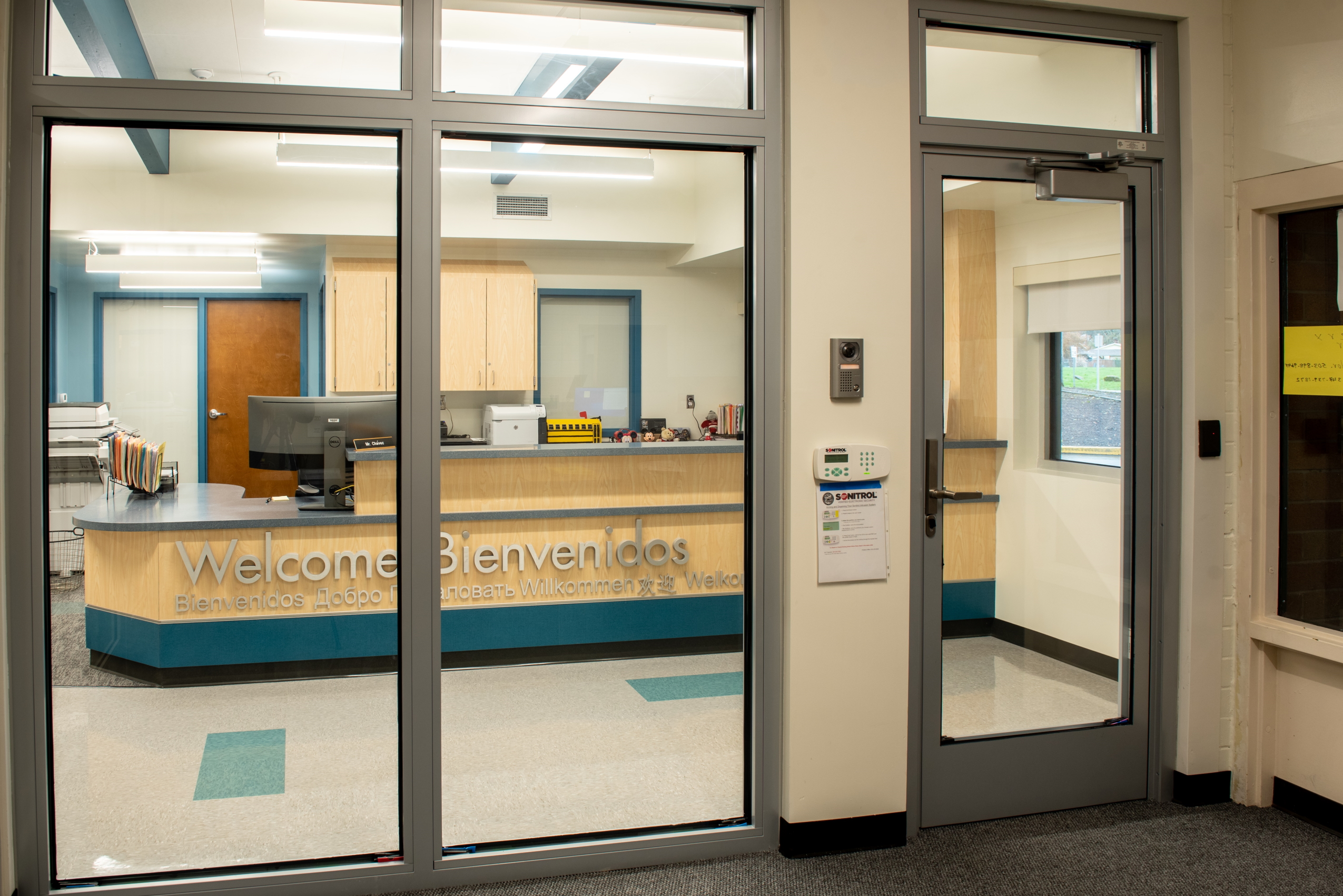 Sacrificing Occupant-Focused Design for Increased Safety and Security
Another pitfall in specifying for multiple safety and security concerns is to forget about building occupant wellness. While it is important to physically protect the users of a space, providing architectural elements that promote mental and emotional wellbeing should also be a driving force.

One proven way to boost occupants’ mental state is by designing with large spans of uninterrupted glass allowing for greater access to daylight and the surrounding environment. When these qualities also meet fire safety and security goals, they can help the built environment support those within it in multiple ways.

Additionally, creating a more welcoming atmosphere through transparency and visual connection can also improve student learning. These qualities make buildings more legible, reducing difficult to intuit layouts and providing support for confused students. With narrow profiles that offer a close visual match to adjacent, non-rated systems, the multifunctional fire-rated assemblies within Candy Lane Elementary not only help control access with forced entry resistance but also provide an unparalleled level of secure transparency between spaces. This can both help students feel more confident in the first moments of entering the school and help foster a closer relationship between administrators and students.

Increased visual connection can also benefit access control. Intruders may be dissuaded from breaking in if it is apparent that those within would be able to clearly describe or identify them. Further, by allowing those within a building to see an intruder’s approach, occupants gain more time to prepare and protect themselves until first responders arrive.

As such, multifunctional fire-rated glazing can help facility managers design entryways that simultaneously help control access for physical safety and promote mental and emotional wellness with proven design considerations. Systems that feature compatible products remove some of the effort associated with specifying multifunctional fire-rated glazing so facility managers can efficiently design for physical and psychological wellbeing.

Knowing the Desired Rating Requirements
Another complication to incorporating multifunctional fire-rated glazing into the built environment is understanding the rating requirements for both the fire-rated components and the forced entry rated components. For schools, this is further exacerbated by the current lack of universal security standards.

Since fire-rating requirements have been standardized through the International Building Code (IBC), specifying assemblies that meet or exceed these requirements is often much easier than for forced entry and bullet resistance. That said, it should be noted that there is an increased drive to update code requirements to include security glazing in schools. Should these efforts pass, they could render older glazing assemblies obsolete.

Because forced entry and bullet resistance is still a voluntary standard for most school districts, Candy Lane Elementary’s administration needed to define and communicate the type and level of security the renovation needed. Knowing these parameters concretely allowed designers to quickly and efficiently achieve the school’s security goals.

Bullet resistance refers to the glazing’s ability to resist being shot and its level of protection often correlates with the type of gun used as well as the distance between the shooter and the assembly. Forced entry resistance describes how long a system can resist attempted break-ins from intruders with tools such as sledgehammers and crowbars – the longer it resists the higher its level.

Assemblies can pair bullet and forced entry resistance. For example, Candy Lane Elementary chose to select a system with a frame that offered UL 752 level 8 bullet resistance and glass that could withstand forced entry attacks for 12 minutes, according to ASTM F1233 standards. This means, after being shot, the glass can delay intruders for up to 12 minutes. This level of protection the combination of the frames and glass afford those within the building time to alert first responders and to defend in place, both of which have the potential to save lives.

Improve Access Control With Multifunctional Fire-Rated Glazing
Candy Lane Elementary chose to protect its faculty and students with glazing that protects against violent intruders and fire with multifunctional fire-rated glazing. These assemblies also support welcoming and visually appealing designs to support psychological wellbeing. By turning multifunctional solutions, facility managers can improve the safety and security as well as the aesthetic appeal of their buildings to better support current and future tenants.

When these systems use compatible components, facility managers can rest assured that they will perform as intended in the field. This assurance, along with the efficiency with which the assemblies can be specified, make them an attractive option for increasing access control.

David Vermeulen is the North America Sales Director at Technical Glass Products (TGP), a division of Allegion that supplies fire-rated glass and framing systems, and other specialty architectural glazing. TGP works closely with architects, designers, and other building professionals, providing them with the state-of-the-art products, service, and support to maximize design aesthetics and safety in commercial and institutional buildings around the world. Contact him at 800.426.0279.