While emergency lighting is critical to life safety and must function to code, no one wants to see the devices ruin the aesthetics of a building’s interiors. So, industry professionals are increasingly keeping the lights hidden or camouflaged until needed to ensure it artfully blends in with its surroundings.

“From the standpoint of interior architectural aesthetics, traditional wall or ceiling-mounted emergency lighting systems can be sort of an eyesore that establishments with a more refined look want to eliminate because it can take away from the architectural experience,” says John Decker, IALD of Lighting Design Studio, a multi-disciplinary firm.  The company has completed lighting projects for a variety of commercial spaces including resort hotels, spas, casinos, restaurants, retail and office spaces.

Now an innovative option, fixtures completely hidden behind closed-door panels on walls or ceilings, is helping to meet emergency lighting code. Only in the case of emergency or power outage do the doors open and the emergency lights emerge to ensure sufficient light along the path of egress, as mandated by the NFPA and International Building Code (IBC). For even greater discretion, the panels can be painted, wallpapered over, and placed in locations out of the line of sight to make them completely inconspicuous.

A challenge, however, occurs when urgent project timelines lead to unfortunate compromises in building aesthetics, often in the area of emergency lighting, at the last minute.

“When building owners and end users pay for architectural services, they may have a wonderful structure with everything considered in the space – until the end of the project when ill-considered, utilitarian, even ugly, emergency lighting is installed to provide light for emergency egress,” says Decker.

While there are many emergency lighting approaches available that will sufficiently provide one-foot candle of illumination along the path of egress as specified by the NFPA, these options typically begin with deciding on the type of power source that will be used in the event of a power outage.

Often, existing architectural lights are incorporated if possible, powered by centralized inverters or generators. However, when that is not sufficient, dedicated battery powered emergency lights may be required, but these can be obtrusive and unattractive.

“If the engineer proposes to put ugly, ‘bug-eye’ emergency lights in a beautiful interior space, we try to find aesthetic solutions that still meet the code requirement of providing enough egress lighting for emergency situations – while maintaining the beauty of that space,” says Decker, who is a trained architect.

“Bug-eye” is the colorful term used to describe typical emergency lighting that surface mounts on the wall with a battery box under two lamps that resemble a bug’s eyes.

Decker says there are superior methods for hiding, or concealing, emergency lighting.

The first method is to utilize a backup battery hidden in the housing of a lighting fixture, such as a recessed downlight or suspended linear luminaire. In the event of a power failure, the battery will then supply emergency lighting for a designated amount of time as determined by code.

“The recessed solution lends itself to maintaining the integrity of the architectural interior space, so it works functionally and aesthetically,” he adds. 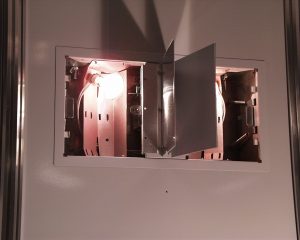 While having emergency lights emerge from door panels when needed keeps them out of the way, lighting professionals like Decker also value the ability to camouflage them as well.

With recessed lighting units, the flat panel doors lay flush with the trim and mounting surface, and exterior trim can be painted or wall-papered to match any color or decor so as to blend in with the architecture.

Because these emergency lights are fully self-contained and can be recessed into walls or ceilings, they are virtually invisible during normal lighting conditions, and thus eliminate unsightly, surface mounted emergency lights and battery packs.

“When these products are fully recessed and the panels are painted or wallpapered to match their surroundings, you really cannot see them unless you are specifically looking,” says Decker.

While this approach can enhance the aesthetics of new builds and retrofits, it is particularly helpful in preserving the “look and feel” of historic buildings, which still must accommodate life safety and security needs, as well as update building systems appropriately.

Such implementation strikes a balance between retaining original building features and accommodating new technologies and equipment.

Lighting products can be wall mount with a total depth of 3.5”; these are well suited for shallow plenum applications, the narrow space between the structural ceiling and drop-down ceiling used for HVAC air circulation.

LED emergency lighting can also be mounted 18” above the floor. This directs light to the floor to more effectively illuminate the path of egress than traditional ceiling or wall mounted emergency lights.

“Wherever aesthetics is valued, concealing emergency lighting should be an option,” concludes Decker.