Saving Water by Reducing Energy Consumption in Your HVAC System

Most facility managers have no idea how much water they’re wasting through their HVAC systems. Fortunately, cutting this waste is a happy byproduct of optimizing HVAC systems to reduce energy consumption and costs. Improving the efficiency of a central plant’s HVAC system, including automating components for real-time optimal performance, can cut chiller water use by thousands of gallons.

Commercial buildings often draw more water for cooling and heating than for any other use—including the far more obvious ones. Water consumption varies by climate and building type, but studies show the HVAC system may account for up to 48 percent of a building’s water consumption, with restrooms and kitchens using 31 to 37 percent, and landscaping accounting for only 18 to 22 percent.

An HVAC optimization solution should reduce the system’s energy usage and costs, decrease water usage in chiller plants, and track savings. It should also calculate the most efficient operation of the whole system – whether that’s one building or an entire campus – in real time, automatically and continuously optimizing the performance of the chiller plant.

Tracking Down Water Losses
The main factors determining a commercial building’s water usage are the size and efficiency of the chiller plant and how much cooling operators do.

Evaporation is the chief cause of water loss from cooling towers, followed by “blowdown,” the intentional draining of water from the system. Cooling towers typically run hot, but not hot enough to kill bacteria. As water evaporates, the dissolved solids in the water become more concentrated – and more dangerous. Legionnaire’s Disease, for example, emerges from mismanaged water systems, including HVACs. Managers have to add chemicals to stop bacterial growth and then perform blowdown to get rid of the chemicals. That water, too, must be replaced with fresh water. When a system is more efficient, less water circulates and less water needs to be flushed out, reducing the need for chemicals.

When chillers and pump motors function more efficiently, they transfer less heat into the plant’s condenser system and thus reduce evaporation. By improving plant efficiency from 1.0 to 0.75 kilowatt per ton of cooling, facility operators can cut water usage by 10 percent or more. The end result is cost savings, reduced chemical usage, and a decreased carbon footprint. 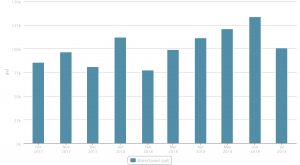 Less cooling also helps, because it causes less evaporation. Buildings with some temperature flexibility – such as hotels, warehouses and offices – can save thousands of

gallons by turning up the thermostat just a degree or two. For instance, dialing the temperature up from 67 degrees to 68 or 69 will reduce the load on air handling systems and cut back on the use of chilled water, and most employees won’t feel a difference in their workspace.

HVAC optimization also reduces the amount of water the air handling system uses. Advanced optimization software can calculate the right amount of air to condition for a particular space at a particular time; typically, that means blowing less air in the morning and increasing the air conditioning as the building heats up during the day.

Combined, optimizing chilled water production, reducing ton-hours of cooling and automating air handling in an HVAC system can lead to a 21 percent improvement in water usage.

Seeing Staggering Savings
Water savings from HVAC optimization depend on the size of the central plant, the amount of space being cooled, geographical location and the flexibility of the building’s occupants. In large buildings with temperature flexibility, the savings can be staggering:

Smaller commercial buildings and those with more exacting temperature standards can see impressive results through HVAC optimization, as well:

Commercial buildings in the U.S. consume 47 billion gallons of water every day, and their HVAC systems are typically responsible for 44 percent of their energy consumption. Optimizing HVAC systems to power buildings with the least possible energy and water use – while maintaining comfort and staying within required operating parameters – clearly has enormous financial and sustainability benefits.