Ask the Drain Brains: Can Video Sewer Inspections Save You Money? 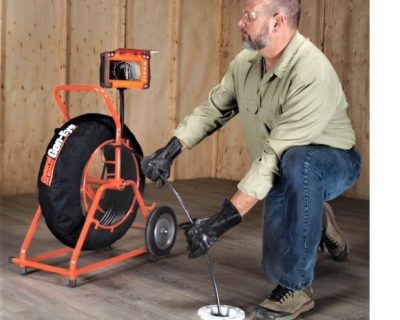 Q: We’ve seen the ads for video pipe inspection cameras, but I don’t see how I can justify the cost. Why should we own a camera instead of paying a contactor to video our drain lines?

A: Video pipe inspection systems have been the hottest item for plumbing contractors in the last decade. Years ago, only the biggest drain cleaning specialist had a camera system. Now, nearly every plumbing contractor has one – and some are doing the camera work for free – so why should you own one?

Well first, because nothing is free. You’re going to pay for an outside contractor one way or other.

Second, owning a sewer inspection camera can save you money.

Example 1: A school bathroom toilet kept clogging. The maintenance staff repeatedly attempted to clear it, but it would clog up again almost instantly. They finally arranged for a camera inspection and found that a pager had been accidentally flushed down the toilet and was acting like a flapper valve.

Example 2: A new hotel had one room that had repeated clogged drain problems. They eventually had the line videoed and found that a dry wall nail had gone through a plastic waste line and created a clog.

Further, if you are buying and selling properties, be sure to inspect the sewer system before the sale closes. Old buildings often have collapsing sewer lines that could cost you tens of thousands of repair dollars if you don’t catch it first.